Home » Car Reviews » 3 Things The Audi E-Tron GT Does Better Than A Porsche Taycan, And 3 It Doesn't

3 Things The Audi E-Tron GT Does Better Than A Porsche Taycan, And 3 It Doesn't 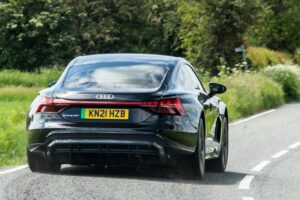 Audi may be taking aim at higher-end versions of the Tesla Model S with its new E-Tron GT, but it also has a rival that’s much closer to home. Fellow VW Group subsidiary Porsche has the Taycan, which uses the same platform, battery pack and a lot of the same drivetrain bits.

We’ve driven a few Taycans now, so naturally, that played on our minds when trying Audi’s closely related saloon. As for which is best, that isn’t clear cut – it depends on what you want from a car. There are areas where one is better than the other, though. Let us take you through it:

I happened to park right near a Taycan at a quick charging stop, and it struck me how comparatively ordinary the Porsche looked. Admittedly it’s quite a spec sensitive car, and the humdrum silver paint of the particular example did it no favours. But however outfitted, the Taycan will never look anywhere near as good as the stunning Mission E concept.

The E-Tron GT, on the other hand, looks scarcely different from its concept forebear. IRL, it has an attention-grabbing low, wide and squat stance, looking especially dramatic from the rear with its neat light signature.

Again, exactly what was done in the configurator matters (the Mythos Black of ‘our’ test car just didn’t do the bodywork justice), but overall, it’s a wicked-looking car.

We’re counting this as something the E-Tron GT doesn’t do better than the Taycan, since it’s a dead heat. The entry-level GT we tried exactly matches the Taycan 4S with 469bhp (523bhp with overboost) from a twin-motor powertrain, making for a 0-62mph time of 4.1 seconds. If you want to go faster, there’s an RS, which is Audi’s equivalent of the Taycan Turbo.

Fully depress the throttle in the base car, and there’s a brief moment of wheelspin before the Audi explodes forward in an organ-compacting fashion. This lasts for maybe a second – after the initial shock (sorry), it feels much less dramatic thanks to the usual linear delivery of electric motors. All of this feels… very similar to a Taycan. And, it must be said, more than fast enough for most.

Both pipe in artificial noise through the speakers to give the driver some throttle feedback, although each goes about it differently. The Taycan uses an amplified recording of the motor spinning, while the E-Tron GT uses a whole bunch of samples including – we’re not joking – an electric screwdriver and someone blowing air down a big plastic pipe.

The Audi soundtrack has more in the way of rumbly, low-frequency noises, meaning the car often seems like it’s still powered by an internal combustion engine when biffing along at lower speeds. With your foot down in Dynamic, though, we get the full sci-fi experience with some loud UFO-like noises. It’d a very different kind of din, but not a better or worse one – I appreciate what you hear in both cars.

There’s not really anything between them in terms of range and charging, either. If the Performance Battery Plus is specced on a Taycan 4S you get the same 93kWh (83kWh useable) pack as the Audi. The official range is near enough the same at nearly 300 miles, with a more realistic real-world figure 250-270 depending on how you’re driving.

In the E-Tron GT, our most efficient drive returned 3.3 miles per kWh, significantly better than the much less powerful Ford Mach E we had in a few weeks back. It’s also leagues ahead of Audi’s heavy E-Tron SUV, which is really just a bastardised Q7 loaded up with batteries rather than a ground-up developed EV like the GT.

In terms of charging, it’s the same story. Both can receive a 270kW charge, which means – providing you can find the right kind of unit – you can take the battery from 5 to 80% in about 20 minutes.

Although this may technically be a loss for the Audi (we’ll get onto why later), make no mistake – the E-Tron is a fine-handling thing. Like most electric performance cars, it hides its bulk (all 2.2 tonnes of it) well thanks to the low-slung position of that massive battery pack. This means changes of direction are nice and fast (helped further by the optional rear-wheel steering), and lateral grip is very good indeed.

Press on and you will inevitably hear the tyres howl in protest as the front end gives up and pushes on into understeer, but you can counter this by giving it a bootful. When doing so, the GT will rotate, but not a whole lot, even with the traction control turned off.

The best part is the damping. The GT rides brilliantly in all modes, settles down nicely after gliding over shoddy bits of tarmac, and doesn’t flop around even when cornering quickly. Air suspension (standard on this Vorsprung Edition, optional on the regular version) is definitely worth having.

The Taycan is ever so slightly tidier, though, and the steering far nicer. The ratio is a little quicker in the Porsche (14.2:1 vs 15.4 in the Audi) and the weightier setup feels more natural. In the GT, it isn’t always easy to place the car where you want it in a corner.

It isn’t necessarily the E-Tron GT’s fault it’s not quite as sharp to drive as the Taycan – that’s Audi’s intention. We were told at an online preview for the car that the E-Tron GT is deliberately set up to be a more comfort-oriented vehicle, and that’s abundantly clear when driving it.

It’s a more pleasant, cossetting car to drive whether you’re blatting along a country road or cruising down a motorway. The Taycan isn’t uncomfortable by any means, but its Audi cousin is the more relaxed of the two by some margin. There is somewhere it could be better in this regard though – the cabin. This leads us neatly to our next point.

Once upon a time, Audi interiors were the best bar none, with a superb mix of classy design and rock-solid build quality. These days, though, it’s all aggressive lines and odd textures. The E-Tron GT suffers from this and is lacking wow factor for a car starting at £80,000.

The Taycan’s cabin, on the other hand, is stunning. It’s far less fussy with a cleaner aesthetic. It’s much more befitting of the hefty price tag, and that curved screen instrument cluster is a wonderful thing.

For a car with such huge exterior dimensions, the Taycan has a surprisingly small rear boot at just 366 litres. The E-Tron GT’s is bigger, albeit not by much at 405 litres. The boot opening is similarly tight, but you can still fit a big, modern mountain bike in there with relative ease when the rear seats are folded flat. Plus, the frunk is four litres larger at 85 litres.

Also, although the interior isn’t as fancy as the Taycan’s, it is easier to use thanks to (gasp!) physical vent direction switches and proper buttons for the climate control system. Presumably due to packaging restrictions, the E-Tron GT gets a load of switchgear borrowed from the A3, rather than the irritating haptic feedback double touchscreen setup found in more expensive Audi products like the A6 and A8. Good.

It isn’t as simple as calling one car a winner. VW Group’s brands have stacks of experience in making myriad vehicles under different brands from one platform, and that pays off for these two. Despite the parts sharing, the two have very well defined personalities and strengths.

Price-wise, the starting point for the E-Tron GT is £79,900. Slightly less than a Taycan 4S, but probably not by enough to sway anyone on the fence. As with the Porsche, raising the Audi’s base price is easily done. Go for the feature-packed Vorsprung Edition and it’s £105,285, and that doesn’t even get you everything – ‘our’ car had a few other bits including 21-inch wheels that upped the final on-the-road figure to £108,030.

Neither of these is exactly democratising the EV, but for the average luxury car buyer, they’re both tempting propositions. The Audi is probably the better bet for most posh car buyers, but for me, and anyone else who places dynamics a little higher up the agenda than they probably should, the Porsche just about swings it.