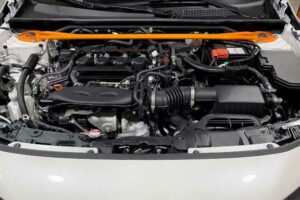 Honda’s debut of the 11th generation Civic sedan, as expected, was met with considerable backlash from the enthusiast community. Not unlike the generation prior, and several before that, the online critics had a field day ripping it to shreds. Many current 10th-generation owners feel that it’s a tamed version of the previous model and lacks the aggressive lines of the 2016-2021 models. Could some attention from the aftermarket change minds? A few brands are diving headfirst into the 2022+ Civic, one of which is 27WON Performance, a group that knows a thing or two about modern Hondas.

For many modern-day Civic fans, the 10th generation was arguably one of very best they’d experienced to date with great handling, a boosted power plant with useable torque, and competitive pricing. And its sales figures prove that Honda knocked it out of the park—and that the 11th-gen has much to live up to.

It’s been a few months now since the all-new 2022 Honda Civic has hit the streets and though the Civic line carries a huge aftermarket presence and ever-growing fan base, the aftermarket for this latest model has been off to a rather slow start. There aren’t many brands or companies acquiring a car to quickly jump on R&D in order to see what the car can do. But 27WON is, and we wanted to see what they were cooking up.

Young and the Restless

Established in 2017, Las Vegas’ 27WON is a young face in the Honda aftermarket. However, in those four years, the brand has certainly made its mark in the industry. Charging forward on its “REDEFINE the Aftermarket” philosophy, they focus primarily on modern Honda technology within 2016+ Honda/Acura models with an emphasis on GDI and turbo technology. Don’t expect them to offer lower control arms for the saturated mid-90s Civic or Integra market, these guys bring their fresh perspective into newer models, like the brand-new 11th-gen.

Driving that point home literally, they picked up a 2022 sedan as soon as it was made available to start dissecting. President and co-founder of 27WON, Vincent, recalls, “we knew we wanted to pick one of these up right away. I went to our local dealer and bought the car before it was even delivered. I had to come back about a week after, once it was at the dealer and ready to actually drive home.”

With just over two months now under their belt with the latest Civic, we wanted to check in and see what they discovered, good or bad, and just how different the new chassis is from the outgoing version. Vincent says, “Out of the box, the car is pretty solid. It’s comfortable and drives well, and the inside does feel more luxurious. You can see they really spent some time bringing the level of class up on the inside and it’s nice when you get in the driver’s seat. I’ve been daily driving the car for the past 10 weeks so that I can really learn everything about it. We don’t just get a car, develop a part, and move on. We learn these cars from bumper-to-bumper, day in and day out so we can truly develop well-crafted and thought-out parts. We did that with our 10th-gens and these new models will be no different.”

In those 10 weeks, 27WON wasted no time taking the car apart and diving in. They tell us that by day five, they’d already fully removed the turbocharger assembly so they could compare it to the unit found in the previous gen. Vincent explains, “day two with the car and we already had it on the lift and were taking things apart. We wanted to first see how the two generations were different from one another, so we first started by trying to install all of our current 10th-gen parts onto the new car. Intake, turbo, intercooler, etc. We pretty much took it all out to see what would go in.”

“The front mount intercooler, intake, and turbo inlet pipe were very different from the 10th-gen. You could see that a whole new design would be required for these key components. Some parts, however, were pretty close. Our rear engine mount from the previous generation Civic almost fit but the 2022 model is slightly shorter, and at a different angle. We think this is in part due to the new sub-frame in the 11th-gen. The 2016-2021 Civic used an all-steel subframe, the new FE1 is mostly made of aluminum. The main center section where the steering column rests is aluminum with steel outboard ends, whereas the outgoing model was all steel. We can only assume this was done from a weight savings standpoint in order to help with MPG and thus emissions, as that is almost always the number one goal with any new Civic.”

“Moving on to the downpipe and front shock tower bar, both were damn near identical matchups. These items required little to no modification to fit, which is awesome because we knew we could make those killer parts from the 10th get straight to work on the 11th. However, after those few parts is where the similarities end.” Vincent mentions that the most surprising aspect of the new model is its engine. Both the naturally aspirated 2.0-liter and 1.5-liter turbo carry over, but when they removed the turbo they found an MHI unit as opposed to the previous IHI version. Both are similar in structure but are produced by different manufacturers.

“The more we dug into the car the more we realized that we didn’t get the L15 turbo engine from the previous generation Civic, we got a detuned version of the current L15 turbo engine from the Accord,” Vincent says. “The turbo, TIP, cylinder head, etc., is all Accord. The L15BY in the Civic is nothing to go crazy about. Yes, it is a factory turbocharged car, but it’s really aimed at the MPG side of things and not the fun performance end.” This shouldn’t be much of a surprise considering we’re not talking about the Si or Type R.

“The IHI is a twin-scroll design which is a very nice, robust unit and very reliable. More so than the MHI units of the past in our opinion. However, it’s a turbo geared toward emissions, as is the whole engine. Factory boost levels on the turbo are about 13-14 psi. It does have VTEC on the exhaust camshaft, but where the Accord uses the second lobe cam profiles for power, this engine only operates it for emissions. Basically, your VTEC is not switching over to make more power but rather to achieve the best MPG.”  Not exactly what the guys at 27WON were expecting but that doesn’t mean they’re not going to put their best foot forward as they begin developing parts to improve performance.

Starting off with a detuned, rather basic engine, Vincent and his crew expect the results from upcoming aftermarket parts to carry a bigger delta than those from like the L15B7. He adds, “We have already seen some impressive gains in tuning from our friends over at Hondata and know once we can get some 27WON flavor injected into this recipe, that the car will really come alive. Like everyone else, my team and I are also eager to see what the Si and Type R variants bring later. Whatever it is, you can expect us to be the first ones on the list for a new car. With a few more months of R&D we’ll soon be bringing some real heat to the new FE1 and we can’t wait to see what it looks like once our signature livery is on the car. We’ve seen some of the clean styling these cars are getting in Southeast Asia and can’t wait to start seeing it stateside.”

Whether or not the new Civic lives up to its older brother is still to be determined and it is a bit early, given that the Si and Type R variants haven’t been released yet, but 27WON is wasting no time in development.