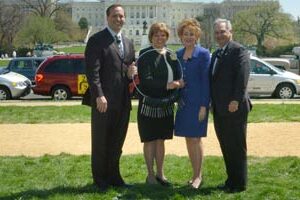 The donation of the Chrysler and Dodge minivans and cross-country tour is designed to create awareness of the law’s impact on reducing teenage deaths, encourage teens to make smart, healthy choices against underage drinking and support teen driver safety efforts – – all timed with high school prom and graduation season just around the corner. Underage drinking is the leading youth drug problem in America and kills more young people than all illicit drugs combined (Grunbaum, 2002).

MADD National President Wendy Hamilton and Chrysler Group Executive Vice President Eric Ridenour were joined by Sens. Elizabeth Dole (R-NC) and Frank Lautenberg (D-NJ) as well as National Transportation Safety Board (NTSB) Acting Chairman Mark Rosenker at a press conference marking the legislation’s anniversary this morning in Washington, D.C. Dole and Lautenberg both played critical roles in the enactment of the landmark legislation 21 years ago. The group was also joined by other members of Congress, their staffs and key program supporters.

“As our nation celebrates the 21st anniversary of this important and lifesaving legislation, we know that amid the celebrating there is much more work to be done,” said Wendy Hamilton, president of MADD. “The 21 minivan tour to 21 cities will reach teens with positive health and safety messages at a time when the pressures and celebrations of prom and graduation season are at an all time high.”

On July 17, 1984, President Ronald Reagan signed the national 21 minimum drinking age legislation into law to eliminate the deadly “blood borders” between states that had differing minimum drinking age laws. The legislation was originally introduced by Sen. Lautenberg, the late-Congressman James J. Howard (D-NJ) and former Congressman Michael Barnes (D-MD) after President Reagan’s Commission on Drunk Driving recommended this federal action in its final report issued in 1983. As then Secretary of Transportation, Dole was the chief advocate of the federal 21 law in the Reagan Administration.

Senator Dole said, “As Secretary of Transportation, I was proud to work with MADD in 1984 to enact the 21 drinking age law. President Reagan would be so pleased to know that nearly 21,000 lives have been saved thanks to his leadership on this important issue.”

“Nearly 21 thousand lives saved over 21 years. I am so proud to have helped make this country a better place for our children and their children. Kids were being killed at the `blood borders’ between New York and New Jersey by drinking where it was legal, then trying to drive home,” said Senator Lautenberg. “That is why I worked so hard to get this bill passed into law. The government should always do what it can to save lives and that is what we did with the 21 drinking age law.”

“Thanks to the enforcement of this ’21 Law,’ an estimated nearly 21,000 lives have been saved. That’s a number worth celebrating,” said Eric Ridenour, Executive Vice President, Product Development, Chrysler Group. “In celebration of the 21st birthday of Chrysler’s invention of the minivan, we hope our donation of 21 Chrysler and Dodge minivans bolsters MADD in their efforts to educate teens on the dangers of underage drinking and toward the goal of many, many more lives saved.”

Immediately following the Washington, D.C., event, MADD and Chrysler Group are taking their campaign to the streets – literally. A 21-minivan caravan will tour the country April 13 through May 5 stopping at high schools along the way as part of a grassroots educational initiative to raise awareness of the perils of underage drinking and promote teen driving safety.

“The fleet of 21 Chrysler Group minivans and the tour to 21 cities helps MADD take our message to more teens and in a way that we think is effective against all the pressures of prom and graduation celebrations,” said Hamilton.

MADD worked to pass the 21 drinking age law in 1984 and continues to advocate for underage drinking prevention support nationwide through its numerous educational programs and legislative efforts in partnership with many other health and safety organizations. In recent progress, the National Research Council’s Institute of Medicine of the National Academies of Science issued a report in September 2003 as a blueprint for underage drinking prevention. One of the key components of that report is the need for active involvement from youth, parents, adults, retailers and law enforcement in order to prevent underage drinking.

• More than half of all fatal car crashes on typical prom weekends involve alcohol. (NHTSA 2005)

• Use of alcohol is associated with the leading causes of death and injury among teenagers and young adults. (NAS, 2003)

• Traffic crashes are the top killer of teens and nearly one-third of teen traffic deaths are alcohol-related. (NHTSA, 2004)

• People who begin drinking before the age of 15 are four times more likely to develop alcohol dependence than those who wait until age 21. Each additional year of delayed drinking onset reduces the probability of alcohol dependence by 14 percent. (Grant, 1998)

• Those who have their first drink prior to age 19 are significantly more likely to become alcohol dependent, drive after drinking, and sustain injuries that required medical attention than those who did not drink before age 19. (Hingson, 2003)

About MADDMADD is the leading anti-drunk driving prevention organization and will commemorate its 25th anniversary this year by celebrating the nearly 300,000 lives that have been saved because of its work in cooperation with other health and safety organizations. MADD’s mission is to stop drunk driving, support the victims of this violent crime and prevent underage drinking.

Each year more than 17,000 alcohol-related traffic fatalities and half a million injuries occur nationwide and MADD is committed to supporting the most effective research-based, scientific solutions that will dramatically save lives including frequent and highly visible sobriety checkpoints and support of legislation to prevent underage drinking. For more information, please visit www.madd.org or call 1-800-GET-MADD.

Chrysler Group has a long history of creating safety education programs to help keep drivers and families safer when traveling in motor vehicles. Chrysler Group is involved in the development and implementation of several safety initiatives. Chrysler Group, along with MADD and other leading national safety experts, works to promote teen driving safety through its Road Ready Teens program. Road Ready Teens is a research-based program for parents and teens that offers tips and innovative tools designed to help teens gain the necessary driving experience and maturity behind the wheel before tackling high-risk driving situations. The program includes Get Road Ready: A Parent’s Guide to Safely Ease Teens into Driving, and an online driving video game, Road Ready StreetWise, that increases teens’ awareness and understanding of driving risks. These resources are available at no charge on the program’s Web site, www.roadreadyteens.org .

About Chrysler and Dodge Minivans

Chrysler Group is proud to have invented the modern minivan 21 years ago. Today’s minivan has evolved from a garageable family hauler to an all-purpose luxury utility vehicle. Throughout that evolution, Chrysler Group has added innovative minivan-first features that enhance the features consumers love best, (safety/security, flexible utility and convenience), while staying true to the original minivan formula of a garageable van designed from the inside out.

The 2005 Chrysler Town & Country and Dodge Caravans offer many innovations that keep consumers safe, secure and comfortable on the road. These are the only minivans in the market to offer a Stow `n GoTM seating and storage system, which features comfortable second- and third-row seats that easily fold into the floor in less than 30 seconds. When all seats are in the upright positions the system also offers an available 12 cu. ft. of storage space. Other features include available three-row side curtain airbags, driver’s side inflatable knee blocker, ParkSenseTM rear park assist, power sliding doors and power liftgate, rear DVD entertainment system, DoorAlert, three-zone automatic temperature control, navigation systems and SIRIUS satellite radio.

The Chrysler Town & Country and Dodge Caravan minivans are recognized as the industry leader with more than 150 industry-wide awards earned and more than 11 million minivans sold. In 2004, the Chrysler Group sold 518,945 minivans worldwide, which is an average of 1,417 sold per day, or 59 sold every hour, or 1 minivan sold every minute.