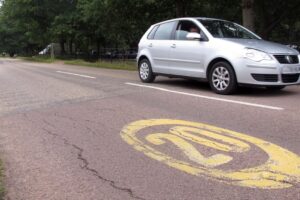 The Welsh government is poised to cut speed limits from 30mph to 20mph in residential and built up areas, with a vote on the measures in the country’s parliament scheduled today.

While Wales has previously been subject to the UK’s national speed limit laws, under devolved powers the authorities are able to make such changes which, if approved, will come into force in September next year.
It is expected that the Welsh plan to reduce limits to a blanket 20mph on restricted roads will be copied in Scotland, with similar measures planned for 2025 as part of the power-sharing arrangements agreed between the Scottish National Party and the Green Party.

The Welsh move has proved controversial, with a government consultation revealing a majority against the blanket reduction, but that hasn’t stopped the Welsh parliament from forging ahead. It points to a possible reduction in road casualties, potentially lower emissions and the need to get drivers out of cars and onto alternative modes of transport in order to meet carbon commitments.

However, opposing voices say the move is undemocratic, and that transport alternatives are not viable. They point to limited availability of cycle lanes, narrow roads and poor public transport. One aggrieved Flintshire local, Adie Buckley, told the BBC in Wales:

“You can’t do 15 to 20 miles each way on a bike when you’ve got kids to pick up and drop off. In rural places, that isn’t possible and that needs to be recognised.”

The Welsh government has acknowledged its new rules won’t be applicable in all situations, and says local authorities will be able to make exceptions to the 20mph limit, but not outside schools.

What are your thoughts on reducing speed limits? Tell us in the comments…