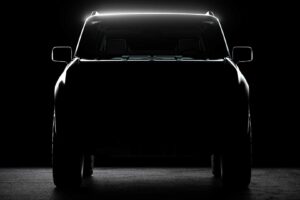 We’d argue the Volkswagen Group missed a profitable opportunity by deciding against bringing the first-generation Amarok to the United States. The German automotive conglomerate will have a rugged truck on sale in North America, but you’ll have to patiently wait until 2026. Newly founded Scout Motors, a company wholly owned by VW, has revived the long-defunct moniker. Its website is now live, and it includes the adjacent teaser image.

Scout Motors is planning an electric SUV and pickup, both of which have been teased before in early design sketches showing their retro-flavored side profiles. The fresh official preview provides a shadowy look at the boxy front end, hinting at chunky styling for the adventurous duo. The VW Group previously said prototypes will be unveiled in 2023 with styling cues inspired by the 1960s iconic off-roader.

From what we’re able to see so far, the prototype rides on meaty off-road tires and has a generous ground clearance. Roof rails and squared-off side mirrors are also noticeable, but that’s just about it so far. The pickup truck and SUV will share a dedicated platform developed specifically for EVs and won’t have anything in common with the current crop of zero-emission VWs. In other words, there will be no connection to MEB-based products.

Announced in May 2022, Scout Motors is run by CEO Scott Keogh and will build EVs in the United States, with the goal to sell 250,000 units annually. The website we mentioned earlier includes a forum as well as a dedicated section for job listings. Interestingly, the company’s social media presence includes Facebook, Instagram, and LinkedIn, but not Twitter. Parent company VW has already paused advertising on Twitter after Elon Musk bought the network.

As a refresher, the VW Group owns the rights to the “Scout” name through its Traton subsidiary which puts Navistar, Scania, and Man under the same corporate umbrella. Navistar was founded back in 1986 as a direct successor to the old International Harvester company, which had the “Scout” trademark at the time. VW’s truck unit Traton bought US commercial vehicle manufacturer Navistar a couple of years ago for $3.7 billion.