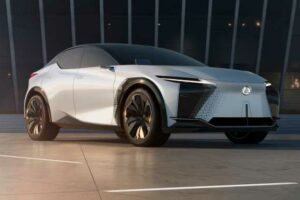 WHAT IT IS: The Lexus LF-Z Electrified provides a glimpse of the design and powertrains electrified Lexus models will adopt in the future. Lexus says we’ll see the styling and technology found in the LF-Z Electrified in production models by 2025. The styling could apply to cars and crossovers, but we don’t know which ones.

WHY IT MATTERS: The LF-Z is touted as “the next generation of Lexus,” and it’s an important concept as almost every automaker goes electric. The company’s controversial hourglass-shaped spindle grille is gone (at least the grille part is), but the spindle shape echoes in the concept car’s nose and extends well up into the hood. The LF-Z’s bodysides make extensive use of creative surfacing to produce a variety of visual planes. Out back, the LF-Z has a full-width taillight and plenty of lines and creases that remind us of the first-generation Toyota Mirai. And although we like the way “LEXUS” is spelled out across the taillight, we have to ask: does the brand really plan to put “Electrified” in illuminated letters across the rump of its future production cars?

The interior, however, is pretty sharp—except the part where it has a yoke in place of a steering wheel. The yoke connects to a drive-by-wire steering system, which at least allows for on-the-fly steering ratio changes.

PLATFORM AND POWERTRAIN: We expect future Lexus battery electric vehicles to use the e-TNGA platform, which is the basis for the upcoming Toyota bZ4X, that brand’s first dedicated electric crossover. However, Lexus says the LF-Z concept uses a drive system called Direct4, which allows two motors to vary power delivery to each of the four wheels. With Direct4 and the drive-by-wire steering, Lexus says the LF-Z is better able to go in whatever direction its driver desires. The concept is powered by a 90-kWh lithium-ion battery pack, which aims to provide a targeted range of 373 miles on the (often optimistic) European test cycle.

ESTIMATED PRICE: As the LF-Z doesn’t preview a specific vehicle but rather a design language and electrified powertrain, it’s difficult to project overall pricing information. However, if the first electric car from Lexus is about the size of the bZ4X, we expect it to start around the $45,000 mark.

EXPECTED ON-SALE DATE: Lexus says we can expect to see this design language and powertrain in production models by 2025. Given that Toyota is launching the bZ4X next year and has said it will add 15 electric vehicles by 2025, we hope to see at least one electric model from Lexus before then.