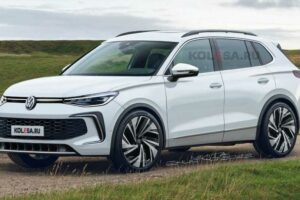 Originally launched in 2007, the Tiguan has been a veritable cash cow for Volkswagen and is currently gearing up for a third generation expected to arrive later in 2023. The future compact crossover was spotted recently hiding its production body for the first time, signaling the hugely popular C-segment model has entered the next stage of development. Based on those spy shots, an independent artist has speculatively rendered the revamped model.

In an attempt to digitally peel off the camouflage, the artist envisioned the 2024 Tiguan with a mix of Golf and ID.4 cues that were seemingly noticeable on the prototype. The next-gen model appeared to be significantly larger than the current vehicle, giving the impression of a slightly smaller Touareg. It also seemed to be less boxy than today’s crossover while having a fully redesigned front fascia.

We’ll remind you the test vehicle had body-colored tape applied to the tailgate in a bid to potentially hide a light bar implemented in the adjacent rendering. Hopefully, VW will get rid of the prototype’s ghastly fake exhaust tips that have plagued other models in recent history. The rendering portrays the 2024 Tiguan with a smooth derrière by hiding the exhaust tip beneath the bumper.

Likely the last generation to come with combustion engines, the revamped model will make use of the VW Group’s cleanest ICEs to date. Logic tells us these are being engineered to meet Euro 7 regulations expected to come into effect in the next few years. Chances are the eHybrid version will be tweaked to unlock more electric miles and we’re hoping there’s going to be another high-performance R version. For what it’s worth, the US-spec Tiguan has already been confirmed to get more power although it won’t receive the “R” suffix.

The interior is a bit of a mystery at this point, although our recent spy shots revealed the 2024 Tiguan will have an ID.4-like setup with a tiny digital instrument cluster and the infotainment’s touchscreen sticking out from the dashboard. Time will tell whether VW is planning two- and three-row versions once again, but the jump in size is understandable since the Wolfsburg brand has the T-Cross, Taigo, Taos, and T-Roc as smaller offerings.