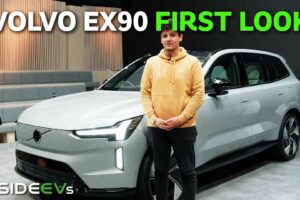 Volvo is one of the few automakers that seems to have openly embraced the complete electrification of its lineup, planning to implement this even before the European Union-imposed deadline of 2035. Its first bespoke EV, built from the ground up to be electric, is an SUV called the Volvo EX90, which we were among the first to see during its official world debut in Stockholm earlier this week.

Mechanically it is virtually identical to the Polestar 3, riding on the same platform, with the same pair of synchronous permanent magnet motors, the same 111 kWh battery pack and basically the same specs. However, that’s really where the similarities end because the EX90 is a lot more conventional looking than the Polestar 3 and it’s designed to be a more practical vehicle featuring a third row of seats where a six-footer can just about fit.

Its exterior looks like an evolution of the XC90’s design, but with no grille (not even a fake one) and slightly longer front and rear overhangs to improve aerodynamics. Inside, Volvo tried to eliminate as many physical buttons as possible, relocating functions to the 14.5-inch screen – this is the first time we’ve seen the hazard lights button relocated to a touchscreen, although it’s still available in physical form in a panel above the driver.

Just like the Polestar 3, the Volvo EX90 is able to charge at up to 250 kW, even though it runs on a 400-volt architecture. This is thanks to its ability to handle a higher-than-usual amperage, up to 600 amps, compared to the 350 amp peak that most current fast chargers can provide.

The Volvo EX90 will become Volvo’s safest vehicle, thanks to an array of ultrasonic sensors and cameras spread all around the vehicle. It even has Lidar that can reportedly “see” in complete darkness up to a distance of 250 meters or around 820 feet, making trips at night that much safer, according to the manufacturer.

Production of the EX90 will only start towards the end of next year, with deliveries expected to begin in early 2024. It’s worth noting that the vehicle you see in the video is probably the only one of its kind currently in the world, although it wasn’t actually fully functional as there was a man with a remote that operated some of its functions since they couldn’t be controlled from inside the vehicle yet – the cool LED DRLs that open, for instance, did not yet work when you simply turned on the headlights.