2024 Volvo Embla EV: Everything We Know About the New Flagship SUV 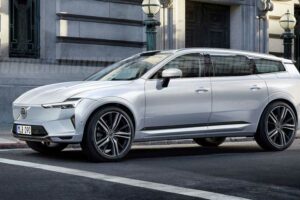 The 2022 Volvo XC90 is now deep into its second generation, having been on sale since 2015, but we expect it will see some major changes for its upcoming third generation EV reinvention debuting soon. (At least, sooner than the 13-some years it took Volvo to redesign the original XC90.) The full-size SUV has long been Volvo’s range-topper, but now the automaker will push it to become a true flagship luxury model, with a more wagon-inspired design and a new “real” name inspired by Norse mythology.

Volvo CEO Håkan Samuelsson previously confirmed to MotorTrend that the company’s new flagship model “will have a name, more like a child,” and the brand wants to evoke its Swedish and Norse mythological roots. The rumored new “Embla” name comes from trademark paperwork filed by Volvo. In regional mythology, Embla is the companion of Askr in a similar story to that of the biblical Adam and Eve.

The SUV is said to be the first of many new Volvos inspired by its new design approach previewed on the Volvo Recharge Concept seem above, so it’s possible Volvo is adopting the Embla name to symbolize the car that is to become the mother of the future Volvo lineup and brand. Whether or not Volvo decides to name another car after “Askr,” we’ll just have to wait and see.

The new Volvo Embla’s design will be very close to the Concept Recharge the automaker debuted in 2021, translating long, sleek wagon-body lines the brand is known for into a larger, full-size SUV package, similar to the current XC90 SUV. The new architecture pushes the wheels further out to the corners of the vehicle, making room for a long-range battery pack that’s expected to power all four wheels through axle-mounted electric motors.

The hump above the windshield houses a lidar sensor for the vehicle’s advanced safety and driver-assistance systems, paired with a full 360-degree sensor suite dotted around the exterior surface. Volvo claims its future vehicles, like the Embla, will feature a new system, currently dubbed “Ride,” that will be able to offer some level of hands-free, self-driving capability eventually, similar to GM’s Super Cruise system.

The safety features carry into the interior of the new Embla, with driver-monitoring cameras and capacitive touch sensors in the steering wheel to make sure the driver is paying attention to the road. The vehicle’s infotainment will be managed on an Android operating system, likely similar to Polestar’s Android Automotive operating system featured on the Polestar 2 EV. Android Auto and Apple CarPlay connectivity are expected, though Polestar has seemingly had issues making CarPlay available on its current models, with delays. Let’s hope those issues are worked out for Volvo’s new system.

To match the new luxury flagship label, Volvo will equip the Embla’s interior with natural and sustainable materials, with a design approach described as “minimalist Scandinavian chic.” On the Recharge Concept, a 15-inch touchscreen stretches across the dashboard, with a configurable digital instrument cluster and head-up display in front of the driver. The new purpose-built EV platform opens up the cabin to more passenger and cargo space than current Volvo offerings, and we expect it to feel even more voluminous with a large glass roof feature or option.

Thanks to the new platform and lineup positioning of the upcoming Embla, we expect Volvo could eventually offer an optional third row of seating, though the Recharge Concept did not feature one. However, the concept did preview pedestal front seats to improve rear leg room, as well as a bag cubby for front passengers, which could show up on the production car.

From the exterior, we’ve already rendered what we think the new Embla will look like. Expect a production version of the Volvo Recharge concept, with the signature Thor’s Hammer headlight design over a smooth fascia, and long, thin vertical taillights framing the rear tailgate reminiscent of classic Volvo wagon design.

It’s still unclear what Volvo will do with its future lineup, for sure, like switching over to real names from its traditional alphanumeric system. We think the Embla will replace the current XC90, but elevate itself to be even more luxurious than before, while touting record performance figures for the brand thanks to its new all-electric architecture.

We expect most of Volvo’s future EV production to come out of Ridgeville, South Carolina, where this will likely be built, as well. Volvo previously suggested we’d see a production model based on the Recharge concept by the end of 2022, so more details on the new Embla should become available very soon.