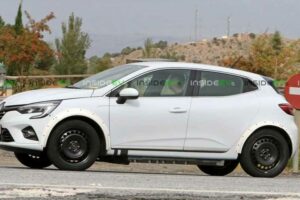 Renault is not afraid to play the history card and resurrect iconic designs from its past, and few of the automaker’s offerings are as well known around the world as the 5, known in the US as the Renault LeCar. The French automaker has now decided to revive the R5 name, as well as some of its most important design cues, and use them on its very important new electric city car.

We’ve seen the Renault 5 Prototype several times up close and even though it looks quite different, it actually has a bit of Mini about it in its proportions. It certainly looks like a sporty and almost premium offering, which is where Renault may choose to position this model, since it will have other cheaper electric city cars on offer.

And even though the vehicle in the photo gallery looks nothing like the 5 design study yet (because it’s wearing a modified Clio hatchback body), it is an early test mule for the new EV. Renault has added flared wheel arches to accommodate the wider track and the wheelbase is also slightly different to the Clio’s too.

The automaker still has time to develop the model since it is not expected to arrive before 2024, when it won’t actually replace the current Zoe model, and it most likely won’t be Renault’s smallest electric offering either. Rumors suggest that a hot Alpine version of the Renault 5 is planned with 215 horsepower, although still just a single motor driving the front wheels, like the standard car.

The new R5 will ride on the CMF-EV architecture, a modular platform specially designed for EVs unveiled in 2020. It will be used in a whole range of models from sporty sedans to SUVs, or anything in between, which is the category the new Renault Megane Electric falls into, the first production vehicle to use this new platform.