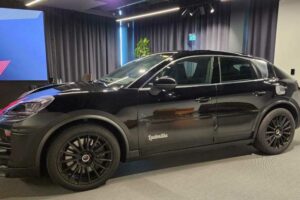 We’ve been talking about the electric Macan for several years and yet deliveries to customers won’t start until 2024. As some of you will recall, Porsche had planned to commence sales in 2023 but recently decided to delay the EV due to problems encountered by Volkswagen Group’s software division Cariad. To ease the wait, Zuffenhausen has now released some preliminary technical specifications, and they’re quite juicy.

As previously reported, the Macan sans ICE will ride on the new Premium Platform Electric co-developed with Audi. The most potent version will have as much as 603 horsepower and more than 738 pound-feet (1,000 Newton-meters) of torque from a dual-motor configuration with all-wheel drive. PPE is also being engineered for a rear-wheel-drive specification with a single electric motor mounted at the back.

While the curb weight remains a mystery, we do know it’ll be distributed 48 percent at the front and 52 percent at the rear. The pair of e-motors will draw its juice from a lithium-ion battery pack with a gross capacity of 100 kWh (96 to 98 kWh usable). Thanks to the 800V architecture, owners of the 2024 Macan EV will be able to juice up the battery pack with its 12 prismatic cells at over 270 kW.

Porsche told our colleagues at InsideEVs that a smaller battery will not be available while a bigger one is not supported by the PPE platform. Range remains a secret for the time being, but we do know owners will be able to replenish the battery from 5 to 80 percent in 25 minutes. To boost the charging speed, clever engineering has gone into developing the battery so that it can work better with 400V chargers by splitting the 800V pack into two halves.

Other confirmed details for the electric Macan include a rear-mounted electronic locking differential and an increase of 15 percent for the steering angle to make the vehicle more maneuverable. For the same reason, there’s also rear-wheel steering at up to five degrees that works at speeds below 50 mph (80 km/h).

As a final note, it should be mentioned the ICE and EV Macans will peacefully coexist for a number of years before the former will be discontinued.