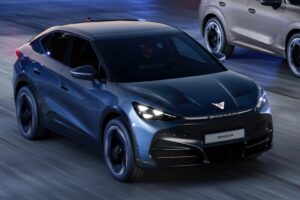 Volkswagen Group’s Spanish electric performance brand Cupra detailed its product plans yesterday during an event that was mostly dedicated to the unveiling of its subcompact electric hatchback, the UrbanRebel.

While the front-wheel-drive UrbanRebel based on the MEB Small platform has been confirmed to launch in 2025 as a more emotional alternative to the Volkswagen ID.2, another Cupra electric vehicle will arrive a year earlier.

We’re talking about the Tavascan SUV coupe, which made an appearance during the event boasting a refreshed design compared to the concept version unveiled at the 2019 Geneva Motor Show.

The design has evolved since then, with the Cupra Tavascan gaining a revised front end with a less menacing bumper, a smaller “grille” and different headlights with a signature inspired by the Tavascan Extreme E Concept. Elsewhere, we can notice VW ID.4-style door handles replacing the concept’s retractable units, a pair of bulkier side mirrors, and smaller wheels.

Not much information was revealed about the Tavascan production model, but Cupra did say it will be the vehicle that globalizes the brand, taking it to new markets.

The Tavascan will follow the Cupra Born hatchback as the brand’s second electric vehicle when it launches in 2024 and will play a major role in increasing the company’s sales to 500,000 units per year by 2025. That’s an ambitious target seeing as Cupra sold approximately 200,000 vehicles since its creation as a standalone brand in 2018.

Cupra did not release any specifications of the Tavascan production model, but we do know it is based on Volkswagen Group’s MEB platform. The Tavascan Concept packed a dual-motor electric powertrain making 302 horsepower, a similar output to the Volkswagen ID.5 GTX’s 295 horsepower.

Since the Cupra brand has a performance focus, the Tavascan is expected to offer only the more powerful dual-motor powertrains and bigger batteries available on the MEB architecture. If the ID.5 GTX is anything to go by, that should translate into decent performance as the VW model does 0-62 mph (0-100 km/h) in 6.3 seconds and reaches a top speed of 112 mph (180 km/h). We’d expect the Tavascan to be slightly quicker than that, though.