2024 Chevrolet Equinox EV Shows Its Softer Side On Chevy Website 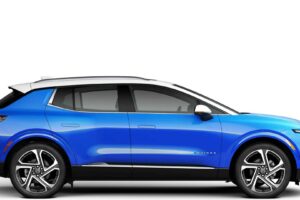 In January 2022, Chevrolet officially announced electric versions of the Blazer and Equinox. With the announcement came renderings of both vehicles and a promise of more to come. The Blazer EV just debuted, and it’s possible the Equinox EV isn’t far behind.

Perusing Chevrolet’s website, we noticed something different in the upcoming vehicles section. We’re treated to a small but clear side view of the Equinox EV, and as far as we can tell, it was added just recently. We suspect it’s connected to the Blazer EV’s debut, but in any case, it offers a side view we haven’t seen before. Nosing around a bit, we managed to find a high-resolution version of the image hiding in plain sight. That’s what you see featured at the top of the article.

Its bright shade of blue with a white roof is quite different from the river of silver, gray, and black we usually see in the automotive world these days. Indeed, a previous rendering of the Equinox EV depicted a silver SUV. We’ve also seen an Equinox RS rendering in red with a black roof, so seeing a third one in such a vibrant shade suggests Chevrolet will offer the Equinox in a wide range of flavors.

This new image offers a great look at the Equinox EV’s styling in profile. Furthermore, having it featured side-by-side on Chevy’s website (albeit small) also highlights differences between the two vehicles. Both utilize GM’s Ultium platform, but the Equinox with its flush door handles looks ready to take on the Tesla Model Y. In the hierarchy of electric vehicles at GM, it could be the choice for younger buyers seeking a more tech-focused experience.

That’s something we won’t know for certain until the Equinox EV debuts. However, we do know that Chevrolet plans to keep the starting price under $30,000. It will be significantly less than the Blazer EV, which starts at $44,995 in 1LT trim, but here’s the catch. Buyers for either electric SUV will have to wait until the first quarter of 2024 before the base models go on sale. Higher-spec (and more expensive) models will arrive first in late 2023.