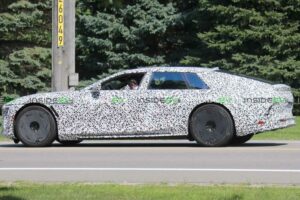 In a world where automakers are increasingly moving to big, brash SUVs to show off their design and technological might, as well as their most advanced EV tech, Cadillac is preparing to launch the Celestiq, a huge and dramatic looking fastback as its flagship offering. It looks really big and… nautical in this new set of photos we got from our spies that show its entire body, giving us strong indications that the production model won’t differ too much from last month’s concept.

In fact, the only big and really obvious difference is the appearance of actual side mirrors on this prototype in place of the concept’s cameras.

Earlier this month, Cadillac released its own set of photos showing a camouflaged Celestiq while testing and that was the first time we were able to get a sense of its actual size and proportions, and with these new shots we got from ours pies, we can safely say this will look like nothing else on the road – electric or otherwise.

It certainly goes some way to justify the expected $300,000 price tag, and it has an interior to match. Most of the concept’s interior, even the 55-inch screen that spans the entire width of the dashboard, will probably make it into production, in order to drive the point home that this is indeed a cut above the usual crop of large luxury sedans (and to offer something dramatically different to more traditionalist names in this segment, like Bentley or Rolls-Royce).

The very high degree of interior personalization will be another ultra luxurious touch which Cadillac is taking from the two aforementioned British automakers. Celestiq buyers will be able to really make their vehicle, especially inside, their own with a never-before-seen breadth of options to choose. This will be made possible through using a less automated production line with fewer robots and more people.

When it comes to the all important range and performance numbers for the Celestiq, we really don’t have a lot to go on right now. We can look at the Lyriq SUV, whose 102 kWh battery pack gives it 312 miles of EPA range, but we expect the Celestiq to offer more, again justifying the considerably higher price tag (the Lyriq cost from around $60,000, around five times less than the upcoming flagship).

Cadillac is reportedly going to unveil the full production version of the Celestiq before the end of 2022, and it should go on sale sometime later in 2023.