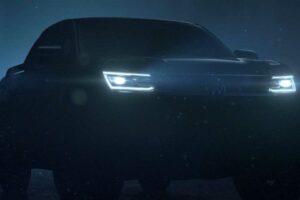 The ID. Buzz was subjected to a painstakingly long teaser campaign and it seems Volkswagen Commercial Vehicles has a similar strategy planned for its next big reveal. The second-generation Amarok is back in yet another official preview to showcase its highly adaptive LED headlights. While all trim levels of the midsize pickup truck are getting light-emitting diodes, only the more expensive ones will have the “IQ Light” tech.

As seen in other VW Group products, from the Polo facelift and above, matrix LEDs automatically dim the light based on oncoming traffic and streetlights. These headlights also do a better job of illuminating curves in pitch-dark driving scenarios. The matrix LEDs generate around 900 lumens or roughly double what you get with the standard headlights.

Completely overhauled, the 2023 Amarok will be brimming with tech. It’s going to have up to 30 driver-assistance functions, a digital instrument cluster, a Ford-borrowed SYNC 4 infotainment up to 12 inches in size, and a Harman Kardon sound system. Buyers will also be able to configure the workhorse with 10-way electrically adjustable seats and choose between two new fancy trim levels – the offroad-focused Panamericana and the road-focused Aventura.

As you have probably heard by now, the new Amarok will be heavily based on the latest-generation Ford Ranger from which it’s going to inherit the structural hardpoints. In addition, the greenhouse, roof, mirrors, door handles, and windscreen will be borrowed from the Blue Oval’s truck. That said, VW has promised a differentiated design inside and out.

Highly configurable, the Amarok Mk2 will be offered with 17- to 21-inch wheels, single and double cab body styles, and a choice between rear- and four-wheel drive. The 4WD setup will either be on-demand on permanent, depending on specification. As far as engines are concerned, customers will be spoiled for choice by picking between several four- and six-cylinder powertrains, some running on gasoline but most of them on diesel. The most potent one will be a 3.0-liter V6 TDI, but it remains to be seen whether it will be a true TDI from VW or it’s going to be carried over from the Ranger.

The wraps are coming off July 7, with assembly (by Ford) kicking off before the end of the year in Pretoria, South Africa. For the time being, the current Amarok will remain in production at VW’s factory in Pacheco, Argentina.