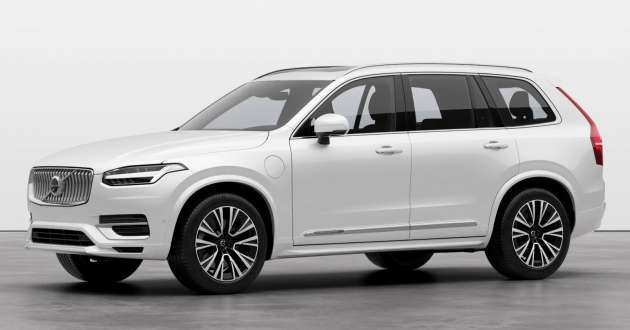 The Volvo XC90 is another model to be updated for the 2023 model year in Malaysia, and just like the V60 and XC40, the available variants now come exclusively in Ultimate guise.

The line-up starts with the B5 Ultimate priced at RM416,888, which is then followed by the Recharge T8 Ultimate at RM432,888. These are on the on-the-road prices without insurance and compared to the previous variants (B5 Inscription Plus and Recharge T8 Inscription Plus), you’re looking at a RM4,000 price increase across the board.

Volvo Car Malaysia (VCM) previously said in April that the XC90 would receive an updated version of the Recharge T8 plug-in hybrid powertrain with higher outputs and increased electric-only range, and this has already been implemented as per our report in May. 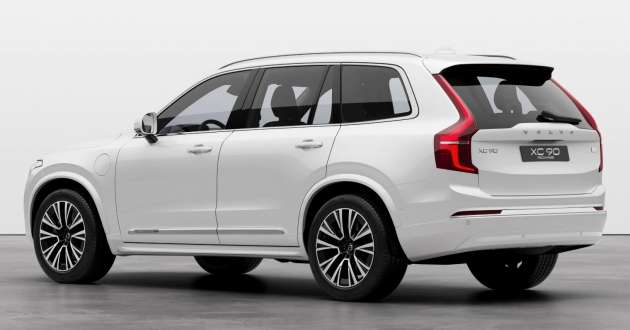 The mill is paired with an eight-speed automatic transmission with Geartronic to drive the front wheels, while a rear electric motor rated at 145 PS and 309 Nm completes the all-wheel drive setup. Performance-wise, the XC90 with the PHEV powertrain will complete the 0-100 km/h sprint in just 5.3 seconds and can return a combined fuel consumption of as low as 1.8 l/100 km.

On electric power alone, the Recharge T8 Ultimate’s 18.8-kWh battery provides a range of 77 km, which is a noticeable improvement over the variant it replaces which can do 50 km with its smaller 11.6-kWh unit. A full charge with a 3.7 kW AC charger (Type 2 connection) takes five hours or 13 hours with a domestic socket.

Meanwhile, the B5 Ultimate gets a 2.0 litre turbocharged four-cylinder petrol engine driving all four wheels through an eight-speed automatic transmission and all-wheel drive system. The base XC90 variant’s powertrain includes a 48-volt mild hybrid system that features an integrated starter generator (ISG) between the transmission and engine. 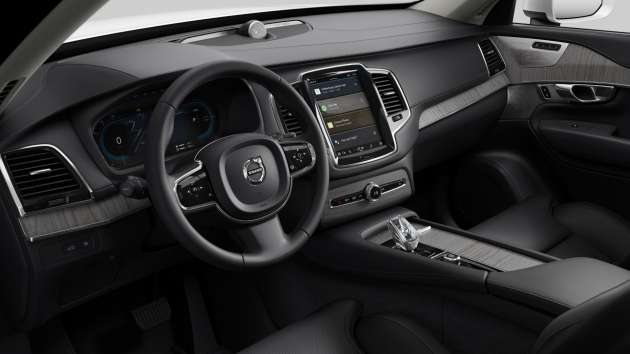 Both variants also have an identical top speed of 180 km/h, in line with Volvo’s safety initiative, and no longer have integrated tailpipes at the rear – this was already true for the B5 Inscription Plus.

As for upholsteries and décor trims, there are now three configurations available, all with a Charcoal interior. The first pairs Charcoal ventilated Nappa leather with Grey Ash décor (RC00), which is joined by two other pairings: Maroon Brown Moritz leather and Linear Lime décor (RA30) as well as Maroon Brown ventilated Nappa leather and Black Ash décor (RC30).

Both the RC00 and RC30 combinations are available for the XC90 if you order the SUV in either Denim Blue, Crystal White or Bright Dusk (replaces Pebble Grey). However, the RA30 combination can only be had with an Onyx Black exterior, with the alternative being the RC00 pairing.

The XC90 also gains an Android Automotive OS-powered infotainment system for MY2023, which continues to be linked to a 1,400-watt, 19-speaker Bowers & Wilkins sound system and a nine-inch, portrait-format touchscreen. As mentioned before, the new infotainment system has Google services built-in and requires the Digital Service Package (DSP) subscription that is included in the asking price for a period of four years – it also enables Volvo Cars app functions.

Beyond these changes, the rest of the spec sheet is pretty much identical to the previous Inscription Plus variants and includes four-zone climate control, a panoramic sunroof, powered front seats with memory function, a head-up display and the Active Chassis with four-corner air suspension.

The XC90 comes standard with a five-year, unlimited-mileage warranty, with the Recharge T8 Ultimate also receiving an eight-year, 160,000-km warranty on its PHEV battery.