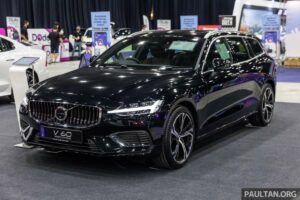 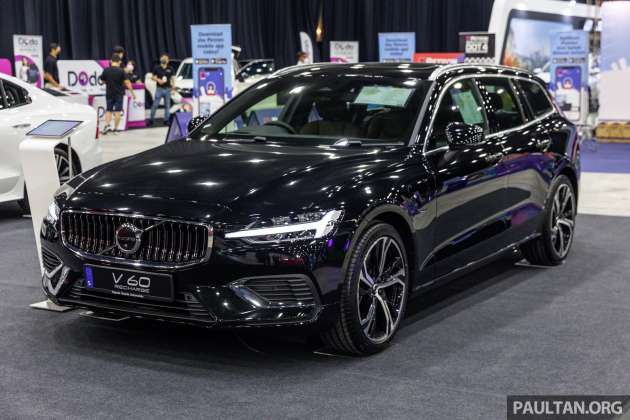 Here’s a live gallery of the updated 2023 Volvo V60, which is offered in Malaysia in a sole Recharge T8 Ultimate variant. Priced at RM321,888 on-the-road without insurance, it replaces the previous Recharge T8 Inscription following the Swedish brand’s adoption of a revised trim structure.

Visually, there’s not many changes on the exterior different aside from the new 19-inch five-triple-spoke black diamond-cut alloys and removal of the integrated tailpipes in the rear lower apron. You’ll still get the chrome-heavy look of the previous Inscription as well as a panoramic sunroof.

Four exterior colours are available, with Onyx Black what you see here, while other options are Crystal White, Thunder Grey and Bright Dusk (replaces Bright Silver). Inside, this V60 gets the pairing of Maroon Brown Moritz leather and Linear Lime décor, although you can also order the wagon with Charcoal Moritz leather and Metal Mesh décor.

On that mention, the interior appears largely the same, with an unchanged nine-inch touchscreen taking up most of the dashboard. This is linked to a new Android Automotive OS-powered infotainment system that replaces the previous Sensus, and it comes with built-in Google services as well as support for Android Auto and Apple CarPlay.

For the 2023 model year, the plug-in hybrid powertrain gets an upgrade to now provide a total system output of 462 PS and 709 Nm of torque, up from 407 PS and 640 Nm previously. The all-wheel drive setup consists of a 2.0 litre turbocharged four-cylinder petrol engine that acts on the front wheels through an eight-speed automatic transmission with Geartronic, while an electric motor is fitted to the rear axle.

There’s increased electric-only range too thanks to the battery now having an increased energy capacity of 18.8 kWh from 11.6 kWh. The new figure is 90 km instead of 49 km, and for charging, the V60 takes five hours for a full charge with a 3.7 kW AC charger (Type 2 connection) and 13 hours using a domestic socket. An eight-year, 160,000-km warranty for the PHEV battery is standard, along with a five-year, unlimited-mileage vehicle warranty.