Home » Car Reviews » 2023 Toyota Vios – next-gen D92A spied in Thailand ahead of Aug launch, to get hybrid for the first time – paultan.org

2023 Toyota Vios – next-gen D92A spied in Thailand ahead of Aug launch, to get hybrid for the first time – paultan.org 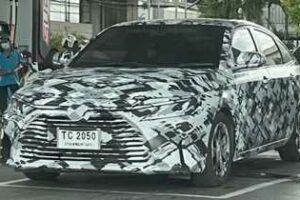 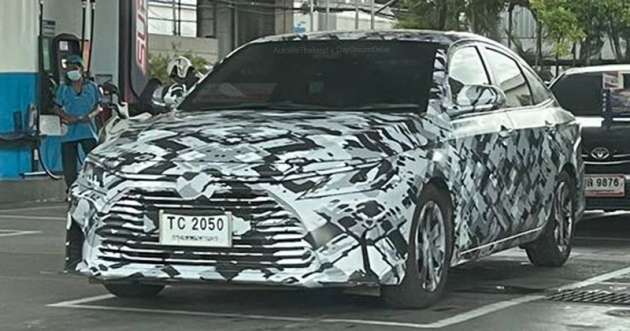 We’ve seen spyshots of the next-generation Toyota Vios from Thailand before, but this time, instead of black baggy clothes, the test mule – still with TC 2050 plates – is wearing a funky camouflage wrap. This gives us a better view of the upcoming B-segment sedan codenamed D92A.

These spyshots were posted by Autolifethailand, which says that the full model change of the Toyota Yaris and Yaris Ativ (the latter is the Thai name for the sedan, which is our Vios) is expected to be launched in Thailand in August this year. This means we’re just two months away from the world debut of this ASEAN favourite. August matches with the Q3 2022 mentioned in previous reports.

The website says that the new Vios will come with two engine options in Thailand – a 1.2 litre naturally aspirated four-cylinder petrol engine (because eco car) and a new 1.5 litre hybrid. Why hybrid? Well, it’s because of Thai incentives for electrified vehicles, the same reason why the Toyota C-HR and new Honda HR-V are hybrid-only in the Land of Smiles.

The 1.5L hybrid powertrain could very well be the same one used in the JDM Toyota Aqua a.k.a. Prius c. In that hatchback, launched in July last year, an Atkinson-cycle version of the latest 1.5L Dynamic Force three-cylinder engine that makes 91 PS/120 Nm is combined with two electric motors and a planetary gearset. The larger of the motors produces 80 PS/141 Nm. The latest European Yaris and Yaris Cross also have this hybrid combo.

While the Honda City has been available as a hybrid for some time now, we’ve never had a “Vios Hybrid” before – this will be the first one. Also, the pure-ICE option is 1.2L for Thailand only, as it’s the eco car limit there – the Yaris/Vios should continue with a 1.5L elsewhere.

Looks big for a compact sedan, doesn’t it? It has been said that the new Vios is built on the Daihatsu New Global Architecture (DNGA), which underpins models like the Perodua Ativa/Daihatsu Rocky/Toyota Raize as well as the Toyota Avanza/Toyota Veloz/Daihatsu Xenia. The sedan’s body is supposed to be inspired by the Daihatsu DN F-Sedan concept from the 2017 Gaikindo Indonesia International Auto Show (GIIAS). That’s good news, and the curved roofline of the mule and its shoulder line do indeed bear resemblance to the red showcar.

What do you think? Previous spyshots and a gallery of the Daihatsu DN F-Sedan are attached below.