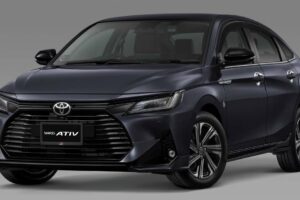 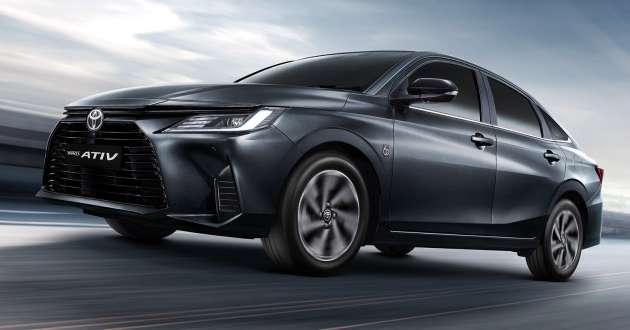 The fourth-generation Toyota Vios has finally made its debut in Thailand, where it is known as the Yaris Ativ. A popular nameplate in the B-segment sedan space, the latest Vios is built on the Daihatsu New Global Architecture (DNGA) platform, which underpins models like the Perodua Ativa/Daihatsu Rocky/Toyota Raize as well as the Perodua Alza/Toyota Avanza and Veloz/Daihatsu Xenia.

The fourth-gen model is instantly recognisable too, as it exhibits hints of the F-Sedan Concept from 2017 and cues reminiscent of the larger Camry and Corolla. At the front, we find the Toyota badge linking the slim upper grille to a much, much larger lower grille with horizontal slats – the latter is joined by prominent faux air inlets in the corners of the bumper.

Meanwhile, the angular headlamps sports L-shaped daytime running lights (DRLs) and are mounted just beneath the upper grille near the bonnet shut line. You’ll notice the bonnet takes up quite a bit of vertical space and is joined by a distinct character line that runs down the vehicle’s sides through the door handles, with a second line parallel to it slightly further down. 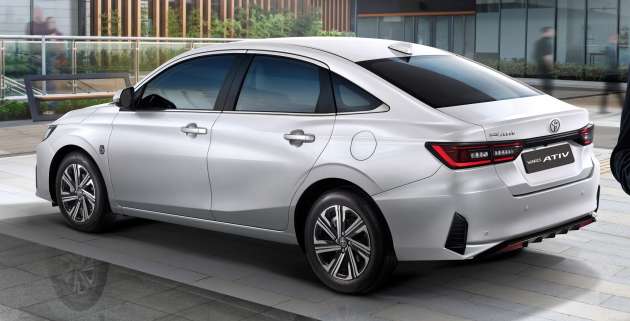 As with the previous model, the side mirrors remain close to the A-pillars, but the wheel arches are slightly recessed on the new car. Additionally, the window line stretches further back and the door openings have been widened as well.

Moving to the rear, we find a trim piece on the boot lid bridging the taillight clusters, which are smaller and more angular in shape than before. The lower apron mimics the front a little by incorporating slender faux air outlets, while the reflectors are integrated into a subtle diffuser-like element.

We’ve already been shown the new Vios’ interior previously, which is a lot more upmarket than what we’re familiar with. Highlights include a freestanding nine-inch touchscreen infotainment system that is surrounded by soft-touch materials, with a silver trim piece separating the upper and lower portions of the horizontal dashboard.

The cabin also appears to be more driver-focused than before, with soft padding on one side of the centre stack to “isolate” the driver from the passenger. Elsewhere, digital air-conditioning controls sit aft of the power outlets and button for the air filtration system, along with the gear lever. The centre console is where you’ll find a small storage cubby, the electronic parking brake (with auto hold) and two switches to control the 64-colour ambient lighting system. 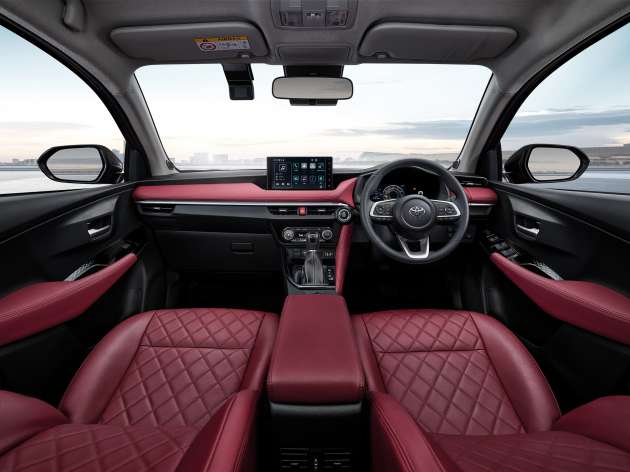 The fancy lighting system is one of a few upmarket features available for the new Vios, with others being a seven-inch digital instrument cluster display, a PM2.5 filtration system, keyless entry and start, quilted leather upholstery, Android Auto and Apple CarPlay support and others.

As for the powertrain, the Vios in Thailand keeps to the country’s eco car regulations by using a 1.2 litre naturally-aspirated four-cylinder petrol engine that makes 94 PS at 6,000 rpm and 110 Nm at 4,400 rpm. The Dual VVT-i DOHC mill is paired with a Super CVT-i gearbox and is claimed to deliver 23.3 km/l, meet Euro 5 standards and there are three drive modes available (Eco, Normal and Sport). 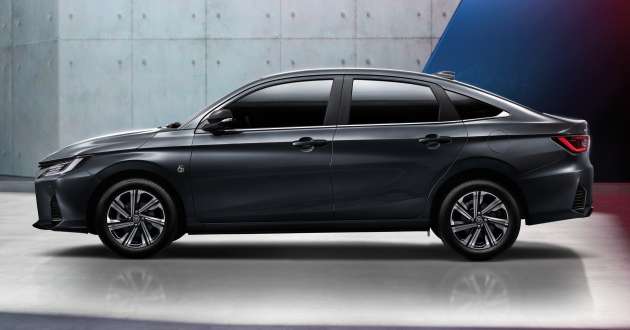 As is the case with new Toyota launches in Thailand, there are a range of accessories available for the latest Vios. The first is the Lusso package that adds on two-tone side skirts and a rear spoiler for an additional 19,900 baht (RM2,500). There’s also the Chiaro package if you want more chrome accents for 8,690 baht (RM1,092) and the Presto package that adds sporty stickers and two-tone line decals for 17,500 baht (RM2,198). 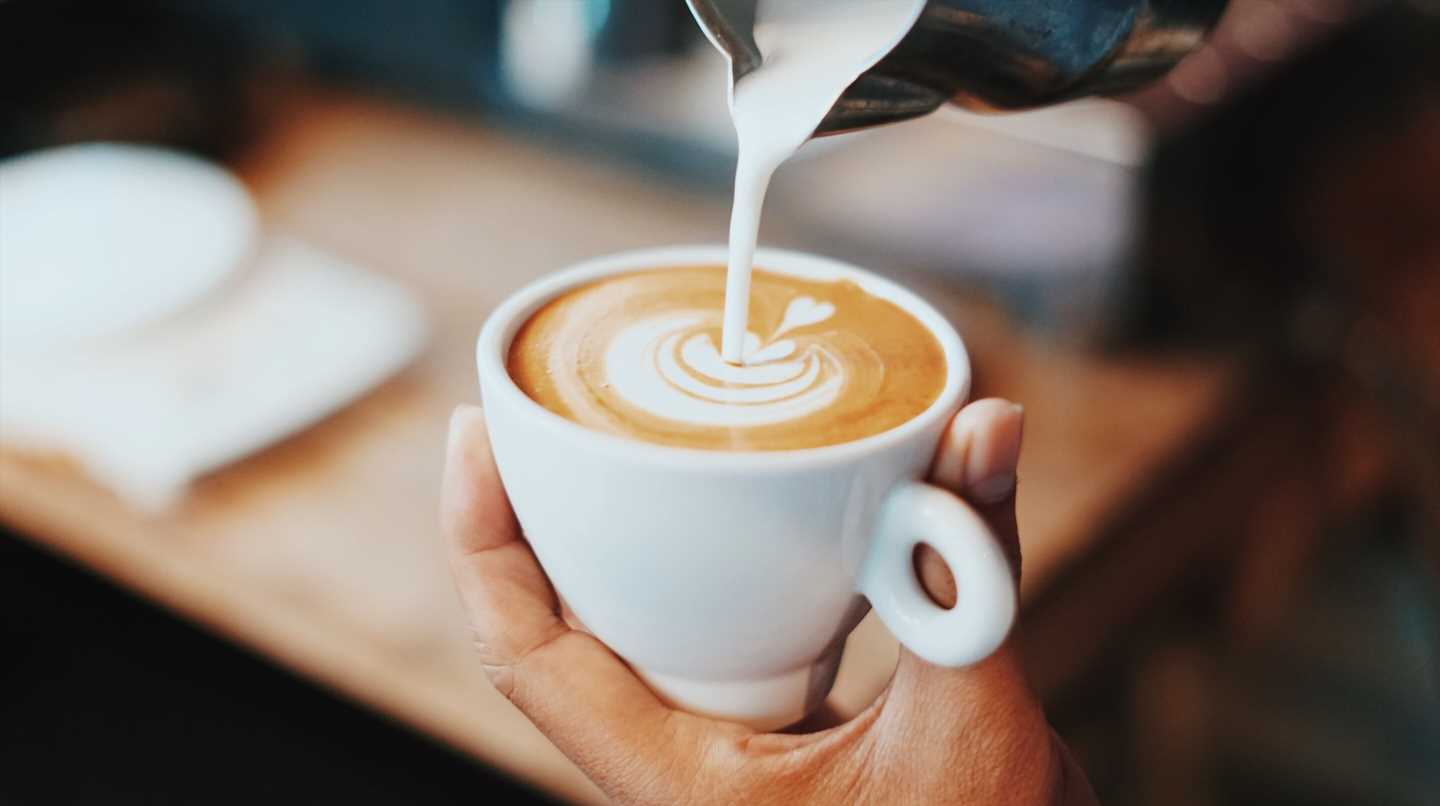