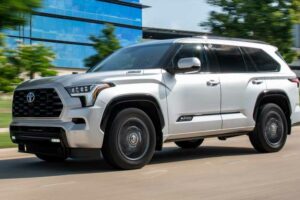 It’s hard to keep track of all the current events that have transpired since the Toyota Sequoia got its last complete makeover, but it’s safe to say the world was a different place. George W. Bush was president, the economy was in the middle of the Great Recession, and “corona” was associated with a beer, not a virus. The Sequoia was last fully redesigned in 2008, and despite others in the segment being rejuvenated, the Japanese SUV soldiered on. Until now.

The 2023 Toyota Sequoia gets a new powertrain, a new platform, and a fresh design inside and out. The three-row body-on-frame SUV is now a hybrid-only model, but it’s also the most powerful Sequoia to date. We spent some time behind the wheel of this freshened full-sizer, and we can tell you right away—the changes help justify the long wait.

It All Starts With the Base

As in previous years, the new Sequoia is based on the Toyota Tundra pickup truck platform. This time, however, things are a little bit different. That platform, the TNGA-F architecture, was developed by Toyota for use across its body-on-frame trucks and SUVs. It now supports other models like the Lexus LX600 and global Toyota Land Cruiser, and likely will even underpin the next-generation midsize Tacoma pickup and 4Runner SUV. Toyota can lengthen and widen the TNGA-F platform, plus deliver model-specific tuning if it needs to, with the shared hardware helping speed each new TNGA-F vehicle’s development time.

The new platform makes the Sequoia a more comfortable SUV while keeping its trucky feeling intact. The outgoing Sequoia was criticized for its old-school ride and handling (and, well, its old everything), but the 2023 model vastly improves all that. With a new independent front suspension and a live rear axle replacing the former Sequoia’s independent rear suspension—technically a step backward, especially as more competitors in the full-size SUV space are moving to adopt independent rears—the Sequoia somehow feels more planted and smoother. Despite the Toyota’s big body, hard cornering doesn’t provoke as much body roll. An optional rear air suspension makes the ride a bit floatier and helps with load leveling when towing (the maximum is 9,000 pounds), while the larger wheel sizes on uplevel trims (especially the 22-inchers on the range-topping Capstone model) compromise ride quality somewhat.  You’ll feel a juddering sensation on imperfect roads as the suspension contends with those wheels’ mass and low-profile tires. We drove a base SR5 model with 20-inch wheels and noted a better ride compared to the top-trim Capstone’s 22-inch wheels, and the 18-inchers standard on the SR5 and included with the TRD Off Road package ride better still.

Mechanically, Toyota’s hybridized i-Force Max 3.4-liter twin-turbo V-6 engine steals the show. Making 437 hp and 583 lb-ft of torque between the gas V-6 and an electric motor, the Sequoia is more than adequately powered. With peak torque delivered at 2,400 rpm, the Sequoia feels sharp off the start. Just like in the Tundra, the Sequoia’s hybrid power helps it off the line, virtually eliminating any turbo lag. More impressively, the Sequoia doesn’t really need more power—despite having a big mass to move, the engine does its job to deliver strong and smooth acceleration. The 10-speed automatic plays along just fine, shifting fluidly and holding gears when needed.

All those changes hugely improve the Sequoia experience from the driver’s seat, although not hugely. While the ride is comfortable and settled for the most part, the body still gently bobs during directional transitions and when you come to a stop. Also, the steering feels a bit vague and doesn’t deliver as much feedback as we’d like, even if most drivers will probably be pleased with its soft feel and effortless weight. These behaviors won’t feel out of place to anyone familiar with the current Tacoma or 4Runner, let alone the new Lexus LX. Another improvement we’d like to see is in the ambient noise department. Toyota says the Capstone trim is equipped with an acoustic windshield and front windows, but we still heard a decent amount of wind and tire noise in every trim level we sampled, with a lot of the whooshing emanating from the door mirrors.

While fuel economy figures have not been released, Toyota says the hybrid Tundra’s figures are a pretty good preview. That would mean something like 20 and 22 mpg combined for regular Sequoias, depending on their drive configuration, a huge step up from the previous Sequoia’s 14-15 mpg combined. Sure enough, during our drive, the Sequoia’s trip computer displayed 20 mpg after our 50-mile drive in the Platinum 4×4 model, though we suspect the off-road-focused TRD Pro model—we have a full first drive review of it here—and its less aerodynamic body addenda and 33-inch all-terrain tires will hold that efficiency back somewhat.

Of course, the TRD Pro is just the most extreme example of the big benefit of a three-row Sequoia over a three-row Highlander: off-road chops. Part-time four-wheel drive with low-range gearing is available in every grade (and standard on the TRD Pro), and the SR5 and Limited trims’ optional TRD Off-Road package (a first for Sequoia) goes a step further with a locking rear differential, multi-terrain select (which helps with traction depending on the type of terrain), and crawl control. The TRD Off-Road package also comes with Bilstein monotube shocks and TRD springs that soften the ride on road while improving suspension articulation to boost capability off-road.

The four-wheel-drive-only TRD Pro goes all-in on off-road gear and adventurous style, but you’ll pay for that. Pricing starts at $78,395, just behind the range-topping 4×4 Capstone model. This is the most off-road-capable Sequoia, and comes with Fox shocks with internal bypass valving, a front skidplate, a TRD Pro exhaust tip, and unique 18-inch black wheels with 33-inch all-terrain tires to handle rugged terrain. A locking rear differential is included here, too, along with a smattering of TRD interior bits and bold “TOYOTA” lettering on the dashboard and grille.

Like the Tundra, the Sequoia benefits from a new cabin experience, and it comes well equipped from the start. Each of the five available trims—SR5, Limited, Platinum, TRD Pro, and Capstone—receive unique cabin touches. We were quite impressed with the base trim SR5, which has heated front seats, three-zone automatic climate control, and an 8.0-inch infotainment screen with Toyota’s newest infotainment system compatible with wireless Apple CarPlay and Android Auto. At the tip-top of the ladder, the Capstone is largely successful, too. The two-tone dashboard and the gigantic 14-inch touchscreen (optional on lesser Sequoias, including the SR5) gives a great initial impression, although closer inspection reveals the model to represent more of a feature upgrade than a materials one. The Capstone’s American Walnut open-pore wood trim, for example, feels and looks like plastic, and most of the dashboard and door panels remain hard plastic.

In every Sequoia second-row passengers are treated to plenty of legroom and headroom, though tall adults sitting in the third row might have issues with headroom. Unlike the previous generation, the 2023 Toyota Sequoia’s second-row captain’s seats don’t slide fore or aft. Instead, the sliding capability shifts to the third row, which can move through 6 inches of travel, helping maximize legroom or cargo room as needed. The third row also reclines to deliver a more comfortable seating position, or it can fold forward to allow larger items to fit in the cabin. It does not, however, fold entirely out of the way because the hybrid battery—and, presumably, the live rear axle and its multiple links—takes up the underfloor space where some competitors can stow their third rows flush with the surrounding load floor.

Toyota cleverly tries masking the bulky rear seat situation with a new adjustable cargo shelf system. Among the multiple available positions for this shelf is one that lines it up with the folded third-row seatbacks, effectively creating the continuous load surface the Sequoia otherwise lacks—albeit several feet off the ground.

The 2023 Toyota Sequoia starts at $59,795, and although that’s quite a lot of money, it goes a long way. As we mentioned, the SR5 comes with features that we don’t typically see in entry-level models. The higher you go, the more equipment you get, but almost none of them impact the driving experience, save for the TRD Pro’s beefy suspension and the Capstone’s big wheels, each of which deliver their own firmer takes on the other Sequoias’ comfortable ride quality. Limited and Platinum trims come standard with the flashy 14-inch touchscreen and more features standard, priced at $66,195 and $72,395 respectively. The Capstone model tops out at $79,795; as with every other Sequoia except the 4WD-only TRD Pro, four-wheel drive adds $3,000 to the bottom line.

After spending most of a day driving different versions of the 2023 Toyota Sequoia, the improvements made to the new model are welcome and clear. Although it’s too early to tell whether it could beat the Ford Expedition or Chevrolet Tahoe in a direct showdown, the Sequoia has at least caught up to the present. It’s back in the game, and worth considering if you’re looking at the full-size SUV segment, especially if you stick with one of the lower trim levels.