Home » Car Reviews » 2023 Toyota Prius: See The Changes Side By Side

2023 Toyota Prius: See The Changes Side By Side 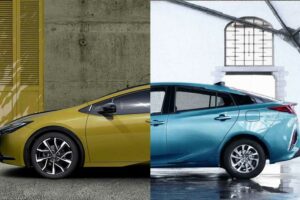 Toyota launched the new Prius just yesterday and it is yet to release pricing information and an on-sale date for the United States. The electrified vehicle will be sold in America in hybrid and plug-in hybrid versions, which both look virtually identical to the European model. This new generation Prius, however, is vastly different compared to its predecessor and we have prepared this quick visual comparison between the two to visualize the changes. In all of the examples below, the new Prius is on the left, and the previous model is on the right.

Starting with the front fascia, the styling changes between the new Prius and its predecessor and major. The 2023 model has a sleeker design with C-shaped headlights and two rows of grilles. The previous-gen Prius, in turn, had vertical LED daytime running lights and X-shaped lower fascia. The new model features a more muscular hood with lines continuing into the upper section of the fascia. The previous-gen hybrid had a flatter bonnet that had small curves flowing toward the fenders

The rear end of both vehicles has a similar overall design, though the little details make them look very different. The newer model’s more flowing design continues at the back where the rear window merges into the taillights with a coast-to-coast LED strip connecting the clusters. Its predecessor had a similar feature, though the shape of the lights was completely different. The new Prius also has a more bulky bumper with round edges replacing the boxy bumper shape of the previous Prius.

The side profile looks very similar between the two vehicles. However, the newer model’s more aerodynamic shape dictates a more steeply raked windshield, as well as a more sloped roof line at the back. The more muscular wheel arches now incorporate bigger wheels and there are gloss black brows underlining the change. Both the front and rear overhangs are slightly shorter than before.

Just like the exterior, the interior of the 2023 Prius is all new. Toyota moves the instrument cluster to sit right behind the steering wheel, breaking the tradition of putting it in the center of the dashboard. There’s a new infotainment system with a larger screen and, thankfully, the physical buttons for the HVAC system carry over to the new model. Overall, the revised cabin looks a little more traditional and practical.