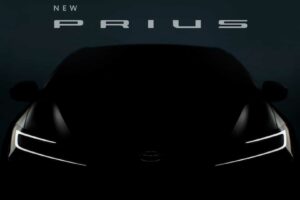 Toyota has had a busy 2022 regarding product launches and its last major debut of the year is a completely new Prius. The once quintessential hybrid has been extensively teased in the last few days, strongly suggesting it’ll have a totally new design. From what we have seen so far, the styling will take after the new Crown, but with a heavily sloped roofline to lower the drag coefficient for better efficiency.

Aerodynamics has always played an important part in the design, and the fifth-generation Prius will be no exception. It’s unclear whether the makeover will come along with a switch to a different platform. Logic tells us it’ll use an evolution of the TNGA architecture that actually debuted in 2015 with the outgoing model. Once again, there should be another Prius Prime with a plug-in hybrid powertrain.

An improved powertrain and a sleeker shape should contribute to even better efficiency for the 2023 Prius compared to the outgoing model. In its thriftiest specification, the current car returns 58 mpg city / 53 mpg highway / 56 mpg combined. As for the Prime PHEV, it has an EPA rating of 133 MPGe and will do 25 miles before sipping any gasoline.

Toyota has rapidly expanded its hybrid offerings in recent times and the Prius has fallen out of favor in the crossover/SUV era. It still deserves a place in the company’s ever-growing portfolio, and it looks as though the next-gen car could be the prettiest so far. That should revive demand for the hybrid that was on everyone’s lips in the 2000s and the early 2010s.

The livestream from Japan will start at 1:30 PM JST on November 16. That works out to 11:30 PM ET today, November 15, or 4:30 AM GMT, November 16. Following its debut, the next-gen Toyota Prius is scheduled to go on sale next year as a 2023MY in the United States. We should get our first opportunity to see it in the metal later this week at the Los Angeles Auto Show.