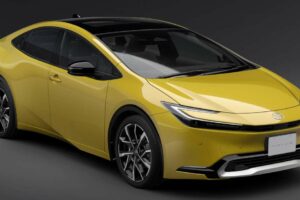 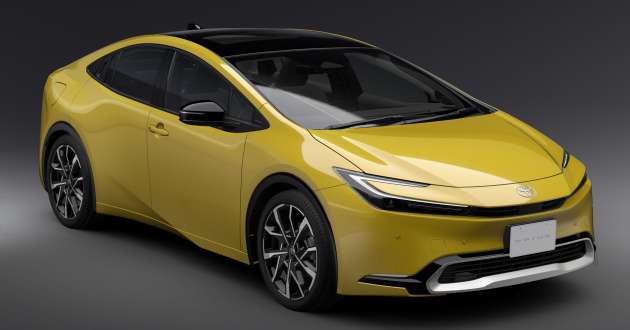 After some brief teasing, Toyota has unveiled the all-new, fifth-generation Prius, which is built on an evolution of the Toyota New Global Architecture (TNGA) used by the fourth-generation model. The Prius nameplate has been around since 1997 with around 5.05 million units sold, and for the latest iteration, the Japanese carmaker says it “decided to start from scratch and look at what the Prius needs to remain popular for the next 25 years.”

The total redesign has resulted in a rather inviting shape that bring back the signature liftback profile of the original. This is coupled with sleeker lines (note the hidden rear door handles) and distinctive creases along the sides, the latter of which also helps accentuate the wheel arches.

Up front, we find a hammerhead shark-like fascia that appears even pointier than what is seen on the bZ4X, which is joined by C-shaped daytime running lights (reminiscent of the bZ Compact SUV concept) that sit above the main headlamps and narrow air intake. A larger, hexagonal-shaped intake with a gloss black trim surround occupies the front lower apron, with another noticeable design cue being the bonnet creases that extend to the tip of the nose.

As for the rear, the outgoing car’s secondary window and protruding boot have been omitted with the liftback profile. The more upright look is accompanied by wide-width taillights that blend in neatly with the carved-out sections of the bodywork highlighted in black trim. Further down, there’s nothing overly expressive, with just a black panel that contains the trapezoidal-shaped number plate recess and reflectors. 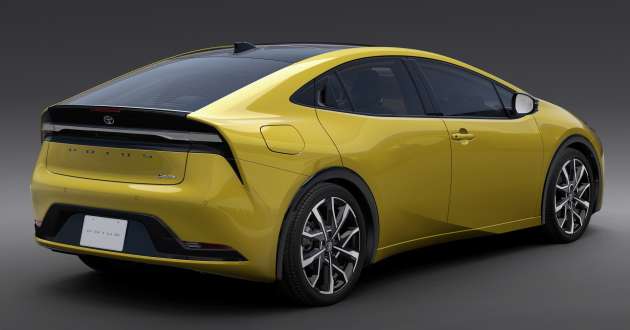 Inside, the new Prius takes a page out of the bZ4X by adopting the same steering wheel and placing the digital instrument cluster further up the dashboard. Toyota says the latter features the first implementation of its illuminated warning system, which not only provides ambient lighting, but also ties into the Toyota Safety Sense systems to visually alert (by flashing lights) the driver to detected objects before audible warnings are delivered.

The new digital instrument cluster also marks the end of Toyota’s placement of vital driving information on the centre of dash, which is something you’ll find in previous generations of the Prius. This “normalisation” of the cabin is also evident in other areas like the centre console that houses the gear lever, wireless phone charger and controls for various vehicle functions.

Elsewhere, the air vents are more discreet compared to the fourth-generation model, and it is sandwiched by a wide touchscreen and a separate control panel dedicated to the climate system further down.

Under the skin, the second-generation TNGA (GA-C) platform allows the Prius to have a lower centre of gravity than before, while also being to accommodate large-diametre tyres. Additionally, further reinforcement throughout the body has increased rigidity and improved quietness. 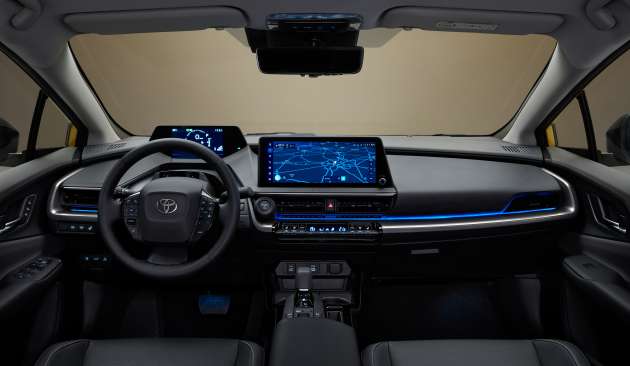 The new Prius’ platform is paired with MacPherson struts at the front and a double wishbone setup at the rear, which is the same as its predecessor. “Combined with the latest powertrains, it delivers a captivating driving performance,” Toyota claims.

Let’s talk about those powertrains. The big news is the introduction of a 2.0 litre plug-in hybrid system that uses a Dynamic Force Engine (M20A-FXS) providing 151 PS (149 hp or 111 kW), a lithium-ion battery pack and an electric motor rated at 163 PS (161 hp or 120 kW) to deliver a total system output of 223 PS (220 hp or 164 kW). The battery pack is located under the rear seat instead of the in the cargo area so the centre of gravity and boot space aren’t compromised.

Toyota says despite the larger-displacement engine, the front-wheel drive PHEV powertrain maintains the same level of fuel efficiency as the previous 1.8 litre, 122 PS (121 hp or 90 kW) setup. Detailed figures – like the claimed 50% increase in electric-only range (current is between 40-50 km) and charging times – aren’t available just yet, but the upshot of the higher output is a 0-100 km/h time of just 6.7 seconds (from 11.1 seconds).

Other aspects of the PHEV powertrain include the My Room Mode feature that lets users enjoy air conditioning and audio systems from the external power source by turning the power switch on during charging.

The other powertrains employ Toyota’s Series Parallel Hybrid System (HEV) and come in 2.0 and 1.8 litre versions. The former (also based on the M20A-FXS) delivers as much as 196 PS (193 hp), which is 1.6 times higher than the existing 1.8 litre model.

On that mention, Toyota didn’t talk much about the 1.8 litre version of the hybrid powertrain, but reports indicate it will be the same setup as before with the 2ZR-FXE four-cylinder. Toyota’s E-Four system system will be offered for the regular hybrids for those who require all-wheel drive.

It should be noted that hybrid and PHEV models share the same design, which wasn’t the case with the fourth-generation model. The latest Prius also comes with two 100-volt, 1.5 kW AC accessory power outlets – one at the back of the centre console and one in the cargo space – allowing users to plug in appliances or peripherals.

There’s also a dedicated attachment so that external power supply is possible with the door windows closed to prevent rain and insects from getting in the car when in use. Other power-related features include a solar charging system for PHEV models that generates power equivalent to driving up to 1,250 km per year, the carmaker claims.

The new Prius also comes equipped with a Toyota Safety Sense monocular camera at the front, a rear-facing camera for the Digital Inner Mirror and an in-vehicle drive recorder, with data stored on the ECU to avoid data corruption.

All grades get the suite as standard, with improvements to the range of detectable objects and inclusion of Advanced Park that can also be operated remotely from outside the vehicle via a dedicated smartphone app. The HEV models will launch in winter this year, while the PHEVs models are set to go on sale in spring 2023.