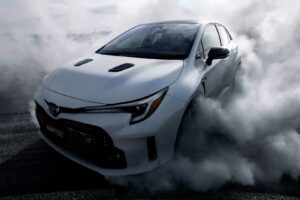 The 2023 Toyota GR Corolla debuted in March this year, marking the return of the Japanese brand to the hot hatch segment in the United States after years of absence. The rally car-looking hatchback is now going on sale and we have official pricing details for the model’s first year in the showrooms.

The very base 2023 GR Corolla has a price of $35,900 without a $1,095 destination fee. The entry-level trim is the Core, of which more than 5,000 units are expected to be assembled for the American market during the first year of production. This vehicle comes as standard with sports seats and with three exterior colors available. Optionally, customers can have the Cold Weather package, which brings goodies such as heated front seats and a heated steering wheel. There’s also the Technology package at an extra cost with a navigation system, an upgraded stereo, and wireless smartphone charging.

Above the base model is the GR Corolla Circuit, which kicks off at $42,900. This is basically a one-year launch version of the hot hatch, which will be available only for the 2023 model year. Its standard equipment includes limited-slip differentials for the front and rear axles, a carbon-fiber roof, synthetic leather upholstery, a premium audio system, and other features that are optional on the GR Corolla Core. This more expensive and better-equipped model will be produced in a limited run of about 1,500 units.

The range-topping GR Corolla for the 2023 model year is the Morizo Edition, which starts at $49,900 without a destination. It has more torque than the other two versions, as well as a weight reduction package, which removes the rear seats, rear speakers, rear window regulators, rear wiper blade, and rear wiper motor. There’s no information regarding the production run of the GR Corolla Morizo Edition, though.

Regardless of the trim level, the 2023 GR Corolla is powered by a 1.6-liter three-cylinder engine, delivering 300 horsepower (224 kilowatts) and 273 pound-feet (370 Newton-meters) of torque. The Morizo Edition has a peak torque of 295 lb-ft (400 Nm). A six-speed manual gearbox sends the power to all four wheels through Toyota’s GR-Four all-wheel-drive system.