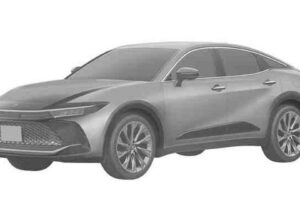 Launched back in 1955, the Toyota Crown has had no fewer than 15 generations and all of them have been typically sold as a sedan. There were also coupes, wagons, and even a pickup, but the saloon has always been at the core of the long-running nameplate. In April 2021, the name was repurposed for an SUV in China where it essentially serves as a fancy Highlander. Fast forward to 2022, here’s an early look at a different Crown.

Patent images obtained by Japanese magazines from the local trademark bureau show a new take on the Crown. It doesn’t seem to be wearing its distinctive badge, but we’re being told this high-riding fastback will indeed be sold as a Crown. The somewhat odd shape should be familiar as the Citroën C5 X and China’s Ford Evos have a similar body. Going back in time, we’re getting hints of the defunct Honda Crosstour.

Sources from the Land of the Rising Sun claim Toyota wants to sell the reinvented Crown with a four-cylinder 2.5-liter hybrid engine hooked out to a CVT. There also might be a turbocharged 2.4-liter with an electric motor and a six-speed automatic. It will sit on the TNGA-K platform and come with a choice between front- and all-wheel drive, with a plug-in hybrid option in the works.

The official premiere is allegedly locked in for July 15. It’s too early to say whether that rumor about a Crown SUV coming to the United States has anything to do with this car. If that’s the case, it could serve as an indirect replacement for the Avalon, which is bowing out after the 2022 model year. Another piece of the puzzle we’re missing is whether Toyota intends to keep the rear-wheel-drive sedan on sale.