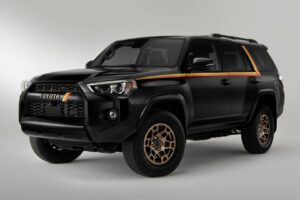 The Toyota 4Runner has been a hit since nearly day one. You go anywhere off-roading happens and among the first SUVs you’ll probably see will be a 4Runner of nearly any vintage. It helps that over four million units—this 4×4 has a thing for, um, fours—have been sold since its debut in 1983 as a 1984 compact SUV. For its 40th Anniversary, the 4Runner sees more fours, with a 40th Anniversary Special Edition that’s a bit more than a badge and stripe job on a 4Runner SR5 Premium trim.

Forty years straight is a long time for a single model to be around, at least for a modern vehicle. Think about the cars that debuted in 1983, the same year as the Toyota 4Runner. The Chevrolet S-10 Blazer, gone for a while but now a compact crossover. Dodge’s Daytona lives on in name only as a trim on the Dodge Charger. The Honda CRX? Nope, gone forever. Mercury Grand Marquis? Mercury doesn’t even exist anymore. It all comes down to the successful heritage of Toyota’s off-road racing and Ivan Stewart, along with the open-top fun you could only get from the third-generation Ford Bronco, the 1973-1991 Chevrolet K-5 Blazer, and 1976-1986 Jeep CJ-7.

Before we get to the present, the 4Runner was almost called something different. Between 1981 and 1983, there was a conversion done by Winnebago called the Trekker. It was built off a short-wheelbase version of the Toyota Hilux as cab and chassis models shipped straight from Japan to Winnebago. The conversion looked very similar to the 1984 Toyota 4Runner that Toyota would eventually produce and were used as test beds for bringing the 4Runner to market. Once Toyota started producing the 4Runner, the Trekker was discontinued.

Shoot through 40 years of sales and existence and the 4Runner is still going as strong as it did when it first debuted. That said, the 4Runner of today is a vastly different vehicle than that first generation 4Runner, so the 40th Anniversary Special Edition needs to cover a lot of rhetorical ground. The great-looking retro stripes do a lot of the lifting here, with classic Toyota yellow-orange-reddish tricolor stripes starting at the C-pillar then kinking around the side glass and shooting forward to the top of the front headlights.

These retro stripe graphics can be had on one of three body colors: White, Midnight Black Metallic, and Barcelona Red Metallic. If you really want to give off the off-road Toyota Racing truck vibe, you’ll want to go with the white body, maybe even add some Toyota racing stripes down the hood if you want the complete look. Even in black, though, it’s hard not to recall images of Marty McFly and his Toyota Pickup from Back to the Future.

While you won’t get the KC HiLites with their yellow covers, the Toyota “Heritage” body-colored grille with matching yellow, orange, and red tricolor just screams classic 1980s-era Toyota. Also, instead of those amazing looking wheels from the Back to the Future Pickup, you get a set of bronze colored 17 inch TRD Pro wheels that are potentially some of the best-looking OEM wheels for a truck or SUV extant. (They match the bronze-colored “40th Anniversary” emblem on the liftgate, too.) The rims are wrapped with a set of P265/70R17 Dunlop Grandtrek AT20 tires. This is a quiet, all-season tire made for SUVs with a SL load range (2,535 lbs maximum load).

Other exterior touches come from the SR5 Premium trim level and include body-colored front and rear bumpers; door handles; heated power outside mirrors with turn signal indicators and puddle lights; fender flares; side rocker panels; and rear spoiler. The roof rails are painted black on the 40th Anniversary version—over the silver painted painted version on the SR5 Premium trim—but do include the black end caps. Also coming along are LED lights for the headlights and fog lights, which are included in the base SR5 model 4Runner.

Inside, you’ll find more 40th Anniversary touches such as bronze badging on the center console, a bronze-colored cross-stitch shift knob, bronze stitching on the SofTex-trimmed seats with a “4Runner 40th Anniversary” logo embossed on their headrests, bronze 40th anniversary badge on the passenger side dashboard, and “40th Anniversary” floor mats. Above your head will be a standard power moonroof. Surprisingly, it isn’t bronze. As part of the SR5 Premium package, you also get an auto-dimming rearview mirror and Homelink universal garage-door opener.

If you want the 2023 Toyota 4Runner 40th Anniversary Special Edition, you’ll only be able to get it with four-wheel drive, even though the SR5 Premium trim package is available with both 4WD and rear-wheel drive. You’ll also be a very lucky buyer, as there will only be 4,040 40th Anniversary Editions made for the US. While not as rare as the Sienna 25th Anniversary Editions—of which only 2,525 will be made—these 4Runners are probably going to sell out just as quickly. With any model of 4Runner, it’s a popular choice among SUV enthusiasts and Toyota won’t have any of these on their dealer lots for very long, if at all.