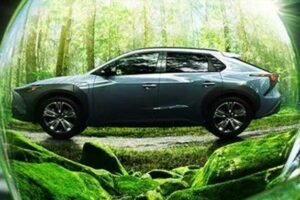 Subaru’s long-anticipated electric SUV, which is being co-developed with Toyota, is almost here. And now we have a name to put to this new Subaru EV: Solterra. The first contours of the new electric crossover have also just been laid out, including that it will come standard with some version of Subaru’s Symmetrical All-Wheel Drive and have “ample back-seat and cargo room.”

According to Subaru, the name is an amalgamation of the Latin words for “sun” and “Earth,” so you can bet that while the Solterra’s powertrain is a change of pace for Subaru, its wholesome, crunchy-granola, dog-loving vibe will surely be played up to commensurate levels.

Subaru initially revealed the 2023 Solterra’s tailgate badge, another photo of the taillight, as well as a shadowy image of the entire SUV, unhelpfully backlit by Sol while it travels across some terra firma. Another batch of photos released more recently essentially reveal the Subie’s entire profile, headlight design, and even its (again, dimly lit) interior at night.

From what we can make out, the Solterra appears to have a long wheelbase, with its wheels pushed to each corner, and a generally sleeker-than-Subie-typical shape. Aerodynamics surely played a role in the smooth profile—minimizing drag helps maximize driving range per charge. And there is a clear (and unsurprising) resemblance between the Solterra’s shape and that of a cutaway illustration of the shared Toyota-Subaru electric car platform (below) shown way back in 2019.

About that platform … Subaru is calling it e-SUBARU, but you may also recognize it as the same bones going beneath the new Toyota bZ4X EV SUV. Whatever you call it, the electric chassis is not shared with any of Subaru’s gas-fed models, and the dedicated setup will—of course—deliver “Subaru’s expertise in all-wheel drive technology” while incorporating “Toyota’s vehicle electrification technology.” Based on the exterior photos alone, we figure the Solterra shares more than a little bit of its basic styling with the Toyota, too.

While the Solterra shares its platform with the bZ4X, we’ll have to see more of the styling and specifications to determine how close these platform-mates are. We expect the relationship to be much like the Subaru BRZ and Toyota GR 86—closely related but with distinct personalities. The answer will come next year or close to it, ahead of the Subaru Solterra’s 2022 on-sale date.

This story was originally published May 11, 2021, and has since been updated to reflect new information and photos released by Subaru.