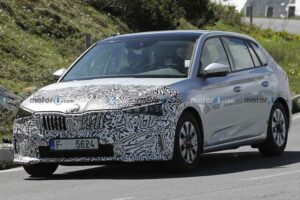 With good reason, some people are wondering what’s the point of the Scala when Skoda has made the Fabia substantially larger than its predecessor. However, the Czechian Golf is still bigger than the supermini without clashing with the Octavia. In addition, the Mladá Boleslav automaker has canceled the Fabia Combi, so those wanting a voluminous cargo area must get the Scala. As evidenced in these spy shots, the mid-cycle facelift is on its way.

Oddly enough, Skoda didn’t hide the headlights and taillights, only because these were borrowed from the current Scala. The front and rear fascias are covered to conceal what we presume are mildly tweaked bumpers. Sensors affixed to the wheels suggest the car was equipped with new hardware that needs to be monitored before putting the compact hatchback in production.

A closer look at the prototype shows the cap on the driver’s door lock is missing, while the rear seats carry some extra bulk to simulate the weight of two passengers. Speaking of the cabin, hiding behind gray duct tape are some wires going inside the rear compartment. You can see them near the lower corner of the rear doors.

Surely the Scala’s facelift won’t be rocking the boat as Skoda will refrain from making its C-segment hatch more sophisticated as that would clash with the fancier Golf. Even though the car was previewed by the hot Vision RS concept, we are not holding our breath for an RS version to join the Rally Sport Octavia and Kodiaq.

Some will remember there is a spicy Scala out there, an Edition S developed by Skoda Germany in collaboration with ABT. It offers 190 horsepower and 290 Newton-meters (214 pound-feet) of torque or an extra 40 hp and 40 Nm (30 lb-ft) over the regular 1.5 TSI model. Only 500 units were made and these came with a lowered ride height courtesy of a stiffer suspension.

Also ruled out is a plug-in hybrid powertrain since Skoda has said on several occasions only the Octavia and Superb will come as PHEVs since they’re popular among fleet buyers.