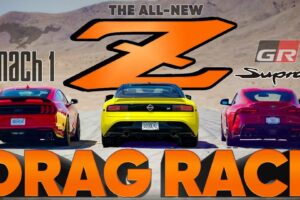 Acceleration in a straight line represents only a small portion of what lures enthusiasts into buying a sports car. Even though it’s not fully indicative of a model’s performance, it sure is fun to watch three rear-wheel-drive coupes battling in a drag race. Now that the embargo for the new Z first drives has finally ended, expect to see a lot of content with the “attainable dream car” as nicely put by Nissan.

Hagerty managed to get a hold of the 370Z replacement with the automatic transmission and lined it up against the Toyota Supra with the same number of pedals and cylinders, but with the latter arranged in a straight-six configuration. The US was represented by the Ford Mustang Mach 1 with its brawnier V8 engine while missing a clutch pedal as well. All three carried roughly similar asking prices, with the Z being the cheapest of the lot at $51,000, followed by the $55,500 ‘Stang and the $56,000 Supra.

The Mach 1 may be the most powerful at 480 hp, but it’s also the heaviest by tipping the scales at 3,850 pounds. Nissan’s hotly-anticipated Z is down by 80 hp while carrying around 240 lbs less than the Blue Oval’s pony car. At 382 hp, the Supra is the least powerful but compensates for that by being by far the lightest, at 3,350 lbs.

With some magic editing by Hagerty’s video team, we can see the Mustang and Supra cross the finish line at the exact same moment. However, Jason Cammisa points out the Mach 1 had a 3 mph higher trap speed, finishing the drag race in 12.1 seconds at 120 mph. As for the Z, it had to settle for third after completing the quarter-mile in 12.3 seconds at 116 mph. Although the Nissan manages to keep up with the other two for the better part of the drag race, it’s handicapped in the beginning. It is worth noting the Z had Bridgestone tires whereas the other two came with Michelin rubber.

In the subsequent drag race, the Z raced against itself in an automatic vs manual showdown. Enthusiasts won’t like hearing this, but the 9AT was faster by half a second than the 6MT: 12.3 seconds at 116 mph compared to 12.8 seconds at 112 mph.

It was then time for the manual Z to duke it out in a drag race against a 2010 Aston Martin V8 Vantage with virtually identical technical specifications. The stunning coupe from Gaydon took the win by a small margin, crossing the finish line in 12.7 seconds or a tenth of a second quicker. Both had the same trap speed of 112 mph.

Jason Cammisa makes the point about how a better set of tires would’ve allowed the Z to match its competition that day. Of course, it’s also only a matter of time before Nissan will release a NISMO version that’ll even the odds furthermore.