2023 Nissan Z Already Wrecked Before It Leaves The Dealership 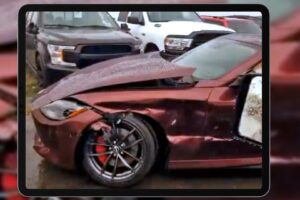 The new Nissan Z has been a long time coming, and we aren’t just talking about the 11 years for which its predecessor was in production. It’s been a year since the production 2023 Z was unveiled, and it’s finally reaching dealerships now. Unfortunately for one Z customer, it looks like the wait has been extended.

That’s what we’re hearing from a recent Facebook post showing the unfortunate aftermath of a new Z that apparently collided with a pickup truck. And we’re talking properly new, as the crash reportedly happened on a dealership lot in the hands of an employee. A Facebook user named Rubert shared a video to The New Nissan Z FB group showing the aftermath.

In the comments, Rubert explains that the car was sold and being brought out by a detailer at the dealership. The driver apparently decided to give the Z a little extra throttle, which proved too much in the wet conditions. The car collided with a Ram truck, and while we have no idea how fast the Nissan was going, it couldn’t have been very slow. There’s extensive damage all along the side of the sports car, and the impact was hard enough to set off the side airbags. The front wheel also looks a tad off-kilter, though it could be an illusion caused by the dislodged front fascia, mangled fender, and tweaked hood.

According to The Drive, this happened recently at a dealership in Puerto Rico. To make a bad situation even worse, their report states the car was actually being delivered to its new owner at the dealership when the crash happened. So yeah, if this buyer has been waiting since the near-production Z Proto debuted back in 2020, this is about as wicked a gut punch as one can get.

We have no idea of the spec for this particular model, nor do we know the current state of the automotive market in that part of the world. We do know that the 2023 Nissan Z starts at just over $41,000 in the States, so even in the best possible scenario, this employee (now ex-employee?) made a very costly mistake.

Rambling About Cars co-hosts Chris Bruce and Christopher Smith configured a new Nissan Z live during a recent episode of the weekly Motor1.com podcast. Check it out below.