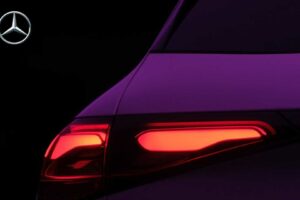 The F1-engined AMG One hypercar currently making the headlines is nice and all, but it’s cars like the GLC that bring home the bacon. After countless spy shots, Mercedes is introducing the high-riding equivalent of the C-Class W206. Sure, it’s not the most exciting vehicle to spend your hard-earned money on, but enthusiasts represent the minority. The three-pointed star is giving the majority what they want – a luxury crossover loaded with tech.

The video’s description on YouTube reveals the next GLC will be six centimeters (2.36 inches) longer than its predecessor. In addition, we get to learn about having a “powerful drivetrain that combines high performance with high efficiency,” which likely refers to a plug-in hybrid drivetrain. If that’s the case, look no further than the C300e sedan with its 2.0-liter gasoline engine and an electric motor producing a combined 309 hp and 550 Nm (404 lb-ft). There might be an even more potent PHEV derivative, joined by a diesel-electric hybrid version (denoted by its “de” suffix) for certain markets.

Unlike the C-Class and its four-cylinder-only lineup, the new GLC will be offered with a six-cylinder mill. However, before you get too excited, we should mention it’ll be a diesel for the 400d version. A fully electric derivative should follow later this decade, but rather than being an adaptation of the same platform, the next EQC is expected to ride on a dedicated platform shared with the future C-Class EV. Both are believed to land in the United States in the coming years.

A new GLC also means it’s only a matter of time before Mercedes will introduce a more expensive and less practical derivative. We’re talking about the GLC Coupe, with both body styles getting electrified AMG versions with four-pot engines. The hybrid C43 was recently introduced with 402 horsepower and 369 pound-feet (500 Newton-meters) while specs for the C63 plug-in hybrid were announced the other day – 670 hp and 553 lb-ft (750 Nm). Expect the equivalent AMG GLCs to have identical outputs.

The Affalterbach-tuned spicy models should arrive in 2023, following the regular Benz models expected to go on sale by the end of this year.