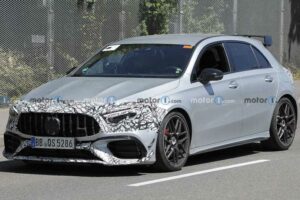 At over 400 horsepower, the Mercedes-AMG A45 has been the spiciest hatchback since the launch of the latest model in 2019. After three years, Mercedes-Benz is already working on giving its hot hatch a mid-cycle facelift and our spies caught one testing on public roads.

As expected from a refresh, the AMG 45 facelift will be getting minor updates on the outside. These can be seen on the concealed portions of the prototype caught. It appears that the headlights are narrower than before, while it’s also expected that the rear will get a fresh set of taillight graphics.

The refreshed model will retain the gnarly quad-exhaust system, while the prototype here is seen donning a wing. Apart from those, you can also expect Merc to update the set of wheels on the AMG A45 to give the little four-banger a fresher look.

Meanwhile, our previous spy shots back in February showed that the AMG A45 will get an updated MBUX system, specifically, the touchpad for the infotainment will be gone in the refreshed model. There will also be a new storage area, while the console has been revamped with fewer buttons than before. The remaining buttons have been relocated forward before the cupholders.

Don’t expect any update on the turbocharged 2.0-liter four-pot gasoline engine. With 416 horsepower (310 kilowatts) and 500 Newton-meters (369 pound-feet) of torque in the A45 S, it’s an extremely potent power plant and regarded as the most powerful four-cylinder engine in the market.

Unfortunately, the Mercedes-AMG A45 won’t be reaching the US since the sedan body style has been dropped from the company’s lineup and the hatchback was never launched. Expect the refresh of the entire A-Class lineup later this year though the exact debut date has yet to be announced.