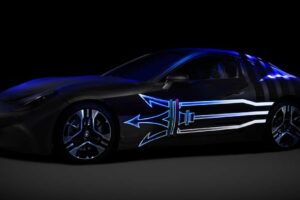 Maserati has released new teaser images of the new GranTurismo, which will make its market debut in 2023 and be produced at Stellantis’ Mirafiori production hub near Turin, Italy. Unlike previous “spyshots,” the new images actually show a lot more of the upcoming model’s final design, even if there’s still a bit of camouflage visible.

At first glance, it’s clear that the new GranTurismo isn’t a radical departure from its predecessor, as it retains a similar profile for its 2+2 coupe body. Prominent haunches, a swooping roofline and smaller side windows are notable cues, as is the front end that is clearly inspired by the MC20. You’ll also notice the bonnet is bowed inward to emphasise those slender headlamps. A convertible version called the GranCabrio will arrive later in 2023.

If you’re curious about the livery and funky wheels, they are indicators that the GranTurismo features an all-electric powertrain developed with lessons learned from Formula E, which the company will be involved in. According to Maserati, the coupe will have a “bone battery” for optimal weight distribution and a lower centre of gravity.

We don’t know what’s the energy capacity of this battery, but it will power three electric motors that serve up over 1,200 hp. It’s fast as a result, with a 0-100 km/h time of around two seconds and a top speed of over 300 km/h. “Top-class” charging performance is another thing that’s being touted, and Maserati says the GranTurismo will be the world’s first electric luxury sports car.

The GranTurismo will also be offered as a hybrid as well as with a traditional internal combustion engine, the latter likely to hit the market first before electrified variants are launched. The EV version being teased will be part of the Folgore range, which is where Maserati will park all its upcoming fully-electric products – Folgore translates to lightning from Italian.

The Folgore cars are an important step for Maserati as it is set to become the first Italian luxury car brand to produce fully-electric models, beginning with the GranTurismo. The company has already announced that its entire line-up will be electrified (hybrid, plug-in hybrid or full EV) by 2025, and by 2030, it’s just electric vehicles that will be offered, keeping in line with Stellantis’ Dare Forward 2030 strategy.

Following this path, all Maserati models will have a 100% electric version by 2025, including the MC20, the next-generation Quattroporte, Levante, GranTurismo, GranCabrio as well as the Grecale. These will complete the Folgore line-up to attract new luxury consumers in all market segments.

Besides showcasing the GranTurismo and revealing its Folgore plan, Maserati also talked about its sales performance for 2021, which saw a total of 24,269 vehicles delivered. The figure is a 41% improvement over 2020, with the Americas market accounting for 35% of total sales. This is followed by China (32%), which also saw the highest growth (58%), Europe, the Middle East and Africa (21%) and Asia Pacific (12%).