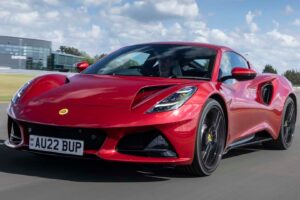 Hello, what’s this? A short lever with an aluminum knob on top—a cold, silvery, billiard ball of a thing with the letter “R” and the numbers one through six engraved on it. Whoa! There’s also an extra pedal in the footwell, to the left of the brake. In an era when most of the fastest, most capable mid-engine sports cars in the world have automated dual-clutch transmissions and paddle shifters as standard equipment, the 2023 Lotus Emira V6 First Edition stands apart.

It’s not hyperbole to suggest the Emira is the most important new Lotus in, well, decades. The mid-engine Emira is designed to move Lotus out of the hardcore, hair-shirt enthusiast milieu of the tiny, bare-bones Elise and its barely more hospitable Exige and Evora variants and into the everyday, every-driver premium sports car segment dominated by Porsche’s Cayman.

“We’ve always wanted to do a more usable, everyday car,” managing director Matt Windle says. Windle believes pivoting away from spartan sports cars will help Lotus boost global sales from its current 1,500 to 1,600 cars a year to 4,800 and help reestablish the storied British brand in the lucrative North American market. The Emira V6 First Edition, which can also be ordered with a six-speed automatic transmission, is arguably the most luxuriously mainstream car from Lotus since the Excel, the front-engine 2+2 coupe built between 1982 and 1992. It’s also fundamentally, indisputably a Lotus. Both these things are good.

The roominess of the interior provides the first hint that the Emira is a different sort of Lotus. Unless you’re well over 6 feet tall, you won’t need to run the seat all the way back to be comfortable behind the height- and reach-adjustable steering wheel. And there’s even a small shelf behind the seats, wide enough for a couple of soft bags and some coats. More soft bags will fit in the deep trunk behind the engine.

Almost every surface you can touch is covered in leather or Alcantara. There’s a digital dash and a decent-size touchscreen at the center of the dash, both with crisp, clean graphics. The Emira also has air conditioning, navigation, a sound system, drive modes, USB ports, cupholders, and power windows. For today’s sports car buyers, these are the basics.

Our Magma Red First Edition is one of the last preproduction Emiras off the new assembly line at Hethel, in the east of England, where Lotus has built road cars since 1966. It’s pretty much production-spec apart from the seats, which will have more padding and tighter-fitting leather when customer deliveries start, and the infotainment system graphics, the design of which was being finalized as we arrived.

In addition to trim and convenience and styling upgrades that are optional on the regular Emira V6, the First Edition also gets the Lotus Drivers package, which includes a Track mode setting for the ESP, a limited-slip differential, and the choice of touring or sport suspension, the latter of which is also available with grippier Michelin Pilot Sport Cup 2 tires instead of the standard Goodyear Eagle F1s. Our car rolls on the touring suspension and Goodyear Eagle F1s.

The V6 First Edition is powered by the same Toyota-sourced 3.5-liter supercharged V-6 and six-speed manual transmission as used in the Evora, though the peak power output has been dialed back from 416 hp to 400 to meet tougher emissions. Peak torque is 310 lb-ft (317 with the automatic). Other Emiras will be available with an AMG-sourced four-cylinder.

On the road, the first thing you notice is the clutch requires more muscle than in a manual Cayman, and the shift gate isn’t quite as concise, either, which makes it best not to rush second-third and fourth-fifth upshifts. The relationship between the brake and gas pedals is perfect, however, making quick and concise heel-and-toe downshifts a snap.

It doesn’t take long to appreciate that 3.5 liters and a supercharger are a good combination, delivering an abundance of midrange torque and quick throttle response, useful tools in a car weighing less than 3,300 pounds. Lotus says the manual Emira V6 will sprint from 0 to 60 mph in 4.3 seconds on the way to its 180-mph top speed. But what’s more impressive on the narrow, winding roads around Hethel is not the powertrain’s punch but its flexibility.

In third gear, the manual Emira pulls cleanly from 15 mph—1,000 rpm—all the way to 100 mph before hitting the 6,750-rpm rev limiter. Although the revs build with noticeably more urgency above 3,500 rpm, the power delivery is nonetheless smooth and linear, and it’s precisely adjustable via your right foot. The result is a car that is effortlessly quick on any canyon road. And not just between the corners. Through them, too.

The Emira has that lovely lightness of being that’s long been the hallmark of the best Lotus sports cars. It dances down the road on a suspension that’s much more supple than the Teutonically taut setup you find in a Cayman, and the dialogue through the hydraulically assisted power steering is richer and more meaningful.

Turning into a corner requires little more effort than a roll of the wrists. The response from the front axle is immediate, and although there’s more body roll than in the Porsche, it’s much easier to sense the rate at which the loads are building through the tire and into the suspension and thus understand how to adjust the chassis balance.

Torque and traction will initiate mild understeer if you go to power early. To tighten your arc, lift off, and the weight transfer will make the front tires bite again, initiating a smooth transition to mild oversteer that’s easily controlled with the throttle as the load comes off the rear axle. On the track, with all the electronic nannies turned off, the Emira V6 First Edition is as pure and playful a mid-engine sports car as has ever been built.

What’s arguably most impressive about the way the Emira V6 drives, though, is that it doesn’t have to be pushed to be pleasurable. It still feels alert and agile at slow to medium speeds, but it’s also surprisingly quiet and comfortable, with low levels of impact harshness and tire noise penetrating the cabin. Unless you plan to spend every day at the track, the standard touring suspension is a terrific all-around setup.

Of course, terrific driving dynamics are not what will ultimately determine whether the Lotus Emira is a success. It’s the stuff that Lotus, frankly, hasn’t always been all that accomplished at: comfort, convenience, assembly quality, durability, and usability. The stuff consumers live with every day. And on first acquaintance this Emira First Edition is a big step in the right direction.

In addition to boasting a roomy, well-equipped, and well-finished interior, the Emira V6—even in preproduction form—is by far the best-built Lotus ever in terms of fit and finish, inside and out. No, it doesn’t quite have that hewn-from-a-billet-of-steel feeling you get in a Cayman, but then few cars feel as solid as a Porsche.

It may be bigger, plusher, quieter, and more comfortable than any Lotus in decades, but the Emira is still a hugely engaging driver’s car with unique character and charisma.

In other words, it’s still a Lotus.