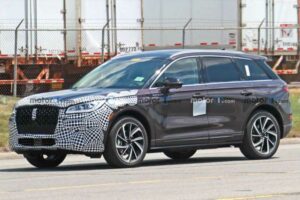 The Lincoln Corsair debuted to considerable fanfare back in 2019. Its handsome styling captured plenty of attention, though it’s been just a modest seller for Lincoln since its debut. 22,790 Corsairs found homes in 2021, but will that number increase with the SUV’s forthcoming mid-cycle refresh?

New spy shots give us our best look so far of what’s in store for the next Corsair. Heavy camouflage covers that concealed details on previous prototypes are gone, revealing the larger grille we suspected was underneath. The new face takes cues from the Lincoln Navigator, dipping further into the lower fascia. A narrow piece of camouflage wrap identifies the stopping point, separating the new upper grille from the lower opening. There’s very little left for a bumper, and the lower portion of the fascia looks unchanged.

Camo wrap still hides the corners of the Corsair’s face. There could be minor changes to the sculpting and lower driving lamps, but the headlights and trim lights look identical to the current model. The rest of this test vehicle is completely free of camouflage, indicating there are no other changes on the outside.

That leaves the interior and powertrain to ponder. In a previous prototype sighting, we saw a strange box bolted to the back of the SUV near the exhaust. The exhaust tips were also non-production, suggesting some kind of emissions testing was underway. As such, it’s possible there could be changes under the hood. Currently, buyers can choose between a turbocharged 2.0-liter four-cylinder, a 2.3-liter turbo-four, or a 2.5-liter plug-in hybrid.

A small bump in power certainly isn’t out of the question for a mid-cycle refresh, or Lincoln could surprise us with something new. Given the minor exterior changes, anything drastic under the hood seems unlikely. The same holds true for the interior, which has thus far eluded our spy photographers. We can see covers on the dash in this new batch, indicating some changes are coming. Larger touchscreens and trim options are certainly possible.

All indications point to the refreshed Corsair debuting for the 2023 model year. This test vehicle looks production-ready, and as such, we expect a debut possibly by the end of summer or in the fall.