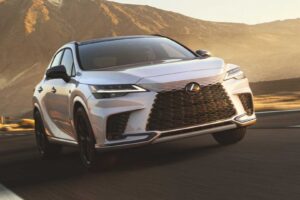 When the original Lexus RX landed in 1998, it was revolutionary, laying out the framework for what we know today as a luxury crossover. The car-based RX looked enough like an SUV while delivering a car-like enough driving experience to convince masses of luxury customers that it, not archaic, body-on-frame behemoths, were the way forward. Of course, today, many trucky, gargantuan SUVs live on—look at the Cadillac Escalade, or even Lexus’s own LX600 and GX models—but the RX shoved them to the larger fringes of the market. Today, nearly every compact and midsize luxury SUV follows the RX’s template. The all-new 2023 Lexus RX might not be groundbreaking in that kind of generational, buyer-preference-shifting way, but it represents the model’s biggest shakeup since Y2K.

You see, ever since reformatting the luxury SUV space over two decades ago, the RX had become… ordinary. The original’s layout, driving manners, and refinement struck gold—but if you study a 2022 Lexus RX350, the regular-grade model, it pretty much assembles the same coterie of parts, from a V-6 engine shared throughout the Toyota and Lexus lineups to a car platform found under, well, most of the Toyota and Lexus lineups. Competitors offer sportier driving dynamics, turbo- or supercharged engines, and the like. The Lexus’s most daring aspect was also its most frustrating, an infuriating-to-use touchpad—think of your laptop’s touchpad—that controlled the primary dashboard screen. Everything else was 1998 remastered with today’s features and Lexus’s in-your-face grille shape and edgy body creases.

The 2023 RX tears up that playbook and, for the first time, ditches the RX’s standard V-6 engine for a more modern turbocharged 2.4-liter I-4 in the RX350 model. While Lexus had also set the pace decades ago with its first-ever RX hybrid, that, too, fell behind, offering merely okay performance and unimpressive fuel economy; there was no plug-in model, either.

That changes, too, with the ’23 RX, which adopts a new RX450h+ plug-in hybrid model (details forthcoming) in addition to a revised hybrid, the RX350h, and a new sporty hybrid, the RX500h F Sport. And while the new RX stays virtually the same size as before, Lexus has rearranged where the primary bits go, stretching the wheels farther apart, opening up interior space, improving the SUV’s stance, and chopping the front and rear overhangs for more aggressive profile.

Sizing Up the New RX

Lexus says the RX has moved to the GA-K architecture, yet remains fundamentally a transverse-engine, front-wheel-drive entity. All-wheel drive is optional, and, on the hybrids, included. Overall length holds at 192.5 inches, the same as the old RX, but the wheelbase swells by 2.4 inches to 112.2. Width grows by 1.0 inch, to 75.6 inches, while the RX’s height is chopped by 0.4 inch to 67.3. These dimensional shifts massage the RX’s shape into something altogether more appealing than the outgoing model’s nose-heavy, somewhat bulbous profile. The hood now takes on a more formal horizontal plane, ditching the old RX’s minivan-like schnoz, and while the Lexus won’t be mistaken for a rear-drive model like the BMW X3 or Mercedes-Benz GLC-Class, it has a fresh, modern appearance.

A big surprise is the grille, which remasters the hourglass shape Lexus has been honing for years. While the overall effect of the grille, surrounding bumper, and the nose cone above the Lexus badge still says “hourglass,” it does so in a subtler whisper, not a shout. The grille’s mesh pattern even fades into the bodywork at its edges. Other stylistic divergences with the old RX include the slimmer, squarer headlights, smoother flanks, and sleeker greenhouse. Lexus doesn’t call any attention to it, but the diagonal quarter window behind the rear doors almost echoes the swoopy shape of the angled C-pillar on the original. It’s not directly retro, though it does add visual interest in an area the first RX did.

Lexus has finally retired the RX’s touchpad-based infotainment system in favor of a more straightforward touchscreen arrangement like that introduced last year in the smaller NX. Like on that model, the show stealer is the optional 14-inch Lexus Interface Multimedia system. It is joined by a digital gauge cluster display, and together the two large displays form a blocky billboard that juts up out of the dashboard ahead of the driver. The rest of the dash has been reformed into a curved, less contrived shape and features a lower section closer to the front passenger for a splash of airiness.

It also appears as though the RX will adopt the electronic button releases for the doors, which are activated by pressing lightly on a button on the door pulls; the exterior door handles are fixed and also have touch-sensitive releases. There are mechanical backups for both, of course. With the longer wheelbase, legroom in the back increases, as does cargo room, despite the overall length of the RX remaining the same.

Not since the RX hybrid first appeared in 2006 has the RX seen so many powertrain shifts happen all at once. The off-the-rack RX350, long powered by a 3.5-liter V-6 engine, switches to the same turbocharged 2.4-liter I-4 offered as an option in the smaller NX crossover. The new engine makes 275 hp and 317 lb-ft of torque and comes mated to an eight-speed automatic transmission. While those figures represent 20 fewer horsepower than the outgoing V-6, torque is way up, by 49 lb-ft, and peaks lower in the rev range, at 1,700 rpm (assuming its specs carry over from the NX) vs. the V-6’s sky-high 4,700 rpm. Performance should perk up not only thanks to the extra torque, but because Lexus says the switch to the GA-K platform shaves nearly 200 lbs from the curb weight.

Next up in the lineup is the RX350h, the hybrid model that takes over, in effect, for the previous-gen RX450h. It switches from a V-6-based hybrid setup to a four-cylinder-based one, adopting Toyota’s 2.5-liter I-4 engine and a pair of electric motors much like the NX350h, combining for 246 hp and 233 lb-ft of torque. Power is routed to all four wheels via a continuously variable automatic transmission (CVT), and the hybrid ups the RX’s estimated fuel economy from 24 mpg combined to 33 mpg. Performance is estimated to be similar to the RX350’s, with Lexus quoting a 7.4-second zero-to-60-mph time, right between the gas-fed RX’s 7.2-to-7.5-second range.

While information on the RX450h+ plug-in hybrid is forthcoming, we wouldn’t be shocked, given the 350h’s similarities to the smaller NX, it followed that SUV’s 450h+ format: A 2.5-liter I-4 engine combined with a starter/generator and an electric motor powering the front axle, plus a second EV motor spinning the rear axle. In the NX and related Toyota RAV4 Prime, this system—plus an 18.1-kWh battery you can recharge—combines for 302 hp. It’s also possible Lexus could swap the 2.5-liter engine for the turbo 2.4-liter unit from the RX350. Why?

Well… look at the new RX500h F Sport. This sporty hybrid is new to the RX lineup, and it combines the RX350’s turbo 2.4-liter engine with a six-speed automatic transmission, EV motor, and an inverter along with a second electric motor powering the rear axle (like on the RX350h hybrid) for a healthy 367 hp and 406 lb-ft of torque.

Not only is this a unique hybrid layout for Toyota, which typically relies on a planetary-type continuously variable automatic transmission to manage the power from a gas engine and electric motors rather than a motor integrated with a conventional automatic transmission, it’s… specifically sporty. As in, its aim is to deliver electrified performance, not merely good fuel economy. Seeing as how past RX hybrids have delivered neither good gas mileage nor performance, it feels like a good move on Lexus’s part to separate the RX350h into economy duty and the RX500h into performance duty. At the very least, we’re intrigued by that torque figure—and left wondering whether this 500h might form the basis for the plug-in RX, or whether the RX350 (more likely) will integrate its components with a larger battery capable of delivering some EV-only driving range.

While details are forthcoming—pricing included—the new RX will include several tech advances, including a jump to Lexus’s Safety System 3.0 (the outgoing model is at 2.0). In any event, this setup includes a collision warning system with pedestrian and motorcycle detection, automated emergency braking, adaptive cruise control with curve speed adjustment, lane departure warning, lane keep assist, and a newly available Advanced Park system that can automatically parallel park or pull into or back into a space. Additionally, Lexus is introducing a digital key setup—phone-as-key—that’ll enable users to unlock or lock their RX (and start it) using only their phones.

We’ll find out more about the pricing and trim details on the new RX, as well as info on the plug-in hybrid model, closer to the SUV’s on-sale date later this year. Ditto the fate of the outgoing RX L, the longer, three-row version of the RX that, we suspect, will be replaced by an all-new, proper three-row Lexus soon. For now, however, the RX might not be revolutionizing anything beyond Lexus’s own SUV lineup, but it brings a much-needed injection of new to the RX, a key player in the luxury SUV space.