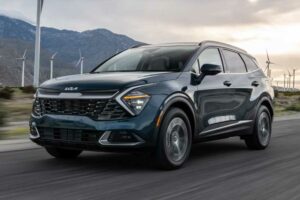 The ruggedly styled Sportage X-Pro may grab eyeballs, but the best version of Kia’s new compact SUV isn’t the one with outdoorsy appeal. Without question, the 2023 Sportage at the top of our list is the new hybrid model. With the 2023 Kia Sportage Hybrid, the hybrid four-cylinder powertrain improves on the standard Sportage’s formula, one that led to a genial but lukewarm first impression. As a result, the new Sportage Hybrid absolutely deserves a chance not only from compact hybrid SUV shoppers but also from Sportage buyers who weren’t considering a hybrid—it’s just not for the reasons you might think.

How the 2023 Sportage Hybrid Is Different

The 2023 Kia Sportage Hybrid is the middle child in a three-model family that will eventually include a more expensive plug-in model. But where that advanced plug-in will carry a base price of at least $36,000, the regular hybrid carries an MSRP less than $30,000. Put another way, you’ll only spend $1,300 more from a base LX non-hybrid to the hybrid, $1,200 on an EX AWD, and $900 more from the SX Prestige. There are no X-Line or X-Pro versions, but the hybrid uses the same mechanical AWD system as those non-hybrid trims, unlike the Toyota RAV4 Hybrid.

Thanks to the Sportage LX trim’s FWD availability, Kia can lower the base price and snag best-in-class efficiency bragging rights, at an EPA-rated 42/44 mpg city/highway. The 2023 Kia Sportage Hybrid AWD comes in at 38/38 mpg, about even with the 2022 Hyundai Tucson and 2022 Honda CR-V hybrids but behind the hybridized Toyota RAV4 and Ford Escape. Oh, and the Kia’s combination of a 1.6-liter turbo I-4 and electric motor results in a class-leading 227 hp.

That’s right, the Kia makes a single horsepower more than the Hyundai Tucson with which it shares a platform.

Although the 187-hp standard 2023 Kia Sportage tried its best on the winding, hilly roads above Palm Springs, California, the hybrid’s 40 extra horsepower are welcome. It’s not just about the numbers but the way the power is delivered. We don’t expect the Sportage Hybrid to post segment-leading acceleration despite its segment-leading horsepower, but it feels noticeably quicker than the standard Sportage. If you scoff at the value of 0-60 times on a sensible compact SUV, consider its value the next time you want a quick burst of speed to pass a big truck on the highway.

With the hybrid, though, that’s only half the story. The other is the way the powertrain quiets the engine. While not as noisy as a RAV4, the standard Sportage does make some noise as its engine gets you up to speed. That’s not as much of an issue on the hybrid, which is more hushed on the highway. The Sportage Hybrid’s six-speed automatic is a mixed blessing. Although it’s reasonably responsive for a heavy hybrid SUV, we wish its shifts were smoother and less noticeable around town. At least brake feel is good; except for a slight pullback at the very end of its travel, the pedal feels almost as natural as that of the non-hybrid.

On winding roads, the 2023 Kia Sportage Hybrid feels capable but never fun. Part of that confidence comes from the well-weighted steering we found was sharper than in the (non-hybrid) Sportage X-Pro we also drove; it’s possible other Sportages with different tires will feel a bit different. The suspension has no problem suppressing speed bumps, either. Considered just on its performance, the Sportage Hybrid is a match for the segment overall, but its real value comes with the way the performance is coupled with features you might not expect.

Improved Interior and the Self-Driving Car

The 2023 Kia Sportage Hybrid’s biggest wow factor isn’t the aggressively different styling but its interior. A 12.2-inch digital instrument cluster isn’t as customizable as we’d like, but the fact it’s standard equipment on the base LX is impressive—a more advanced 12.3-inch unit comes on the line-topping SX-Prestige. Either way, the digital instrument cluster gives the interior a modern vibe, one that’s continued by the 12.3-inch touchscreen on the EX and SX-Prestige trims (the LX gets an 8.0-inch unit). There’s substance beyond the big screens, too. Flexible cupholders and USB outlets halfway up the backs of the front seats make charging much easier for rear-seat passengers or a copilot with too many gadgets.

The Sportage Hybrid’s comfortable rear seats also stand in contrast to the best-selling Toyota. However you compare it, the Sportage Hybrid’s 39.5-cubic-foot cargo area is exceptional, negligibly smaller than the non-hybrid Sportage and big for the compact hybrid SUV segment. As with the other Sportage, we’re not fans of the knobs and lower screen that do double duty for audio and temperature functions.

One rare feature-miss on both Sportage models: Adaptive cruise control isn’t available on as many trims as we’d like. For the hybrid, only the $37,445 SX-Prestige trim gets it because there’s no standard SX trim as on the non-hybrid model. Kia says it’s possible the feature may one day trickle down the trim line but points to increasing costs and supply limitations as well as a balance between affordability and features. Yes, you can live without adaptive cruise control, but the better systems out there can ease your stress during a morning or evening commute. For a future Sportage, we also hope Kia will switch to a capacitive-touch smart-key system; for now, you need to press a button on the door handle to unlock the door.

On the positive side, the Remote Smart Parking Assist feature that first amazed us on Hyundai models is now available on the hybridized 2023 Sportages. Without even being in the car, you can use your key fob to guide the car straight backward or forward into or out of a tight parking spot.

We mentioned the price difference is around $1,000 from a non-hybrid Sportage to its equivalent Sportage Hybrid trim, but what if it were only $200 different? If a power liftgate and AWD are the two most important features for you and the 2023 Sportage otherwise looks good, we strongly encourage you to consider the hybrid. A 2023 Sportage X-Line with a package that includes a power liftgate is just $200 less than a 2023 Sportage Hybrid EX with the same package. Of course there are other factors, but at this $33,000 price point the hybrid is an obvious upgrade.

Get the Hybrid. Do It.

Sportage to Sportage, the hybrid is the better pick, and it’s about so much more than the money you’ll save at the pump. It’s also about a driving range that’s well more than 100 miles longer than the non-hybrid Sportage, meaning you’ll spend less time filling up. The Sportage Hybrid also drives better and is quieter, characteristics most of us want from a compact SUV regardless of what’s under the hood. Things get trickier when you consider the competition: If you skip the Sportage LX FWD base model for one with AWD, fuel economy drops toward the bottom of the segment. The difference isn’t great, but it holds back the Kia in this hybrid-focused segment.

So we’ll refocus on the general 2023 Kia Sportage buyer. If you like what the new model offers but aren’t sure about the noisier standard engine, crunch the numbers and take a test drive in the hybrid before you sign on the dotted line.