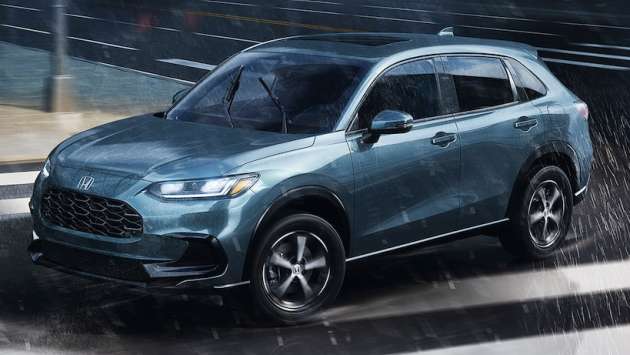 Honda wants to have a slice of the Toyota Corolla Cross pie with the introduction of the larger 2023 HR-V for the North American market. While the global model is still a B-segment SUV, this one jumps a whole size class and is now a C-segment model, sharing its underpinnings with the latest 11th-generation Civic.

Not only does this make for a bigger car but it also allows it to ride on independent rear suspension (likely the Civic’s multilink setup), instead of the torsion beam found under both the global HR-V and the Corolla Cross. Honda says the vehicle has a longer wheelbase and a wider stance compared to the outgoing model.

The design is also very different, clearly catered to American tastes. This is evidenced by the very un-Honda front end, sporting a large octagonal grille and an iteration of the Civic’s slim LED headlights, this time with L-shaped daytime running lights. There are also black plastic C-shaped mouldings that frame the trapezoidal centre air intake, giving the HR-V a more rugged look. 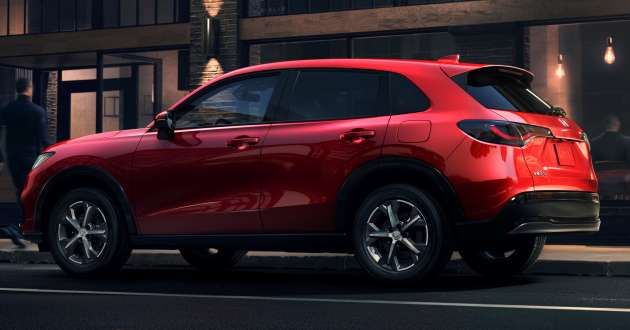 Along the side, a subtle low shoulder line starts from the headlights and leads right into the blistered rear fenders, while the wing mirrors have been moved from the A-pillars to the door body for better visibility, just like the Civic. The size gain is most apparent in the longer bonnet and the additional rear quarter light windows, the latter visually stretching the roofline. Speaking of which, the HR-V borrows laser-brazing tech from the Civic to eliminate the need for roof mouldings.

Moving to the rear, you get inverted L-shaped taillights, a sculpted hatch and more black mouldings on the rear bumper. No interior photos have been shown just yet, but you can expect the HR-V to feature a variation of the Civic’s classy dashboard, replete with a freestanding infotainment touchscreen and mesh-covered air vents. A version of this has already cropped up in the also Civic-based Acura Integra.

Honda has yet to reveal any technical details, but seeing as it’s based on the Civic, you can expect it to feature the sedan’s range of engines – a 158 hp/187 Nm 2.0 litre naturally-aspirated i-VTEC four-cylinder and a 180 hp/240 Nm 1.5 litre VTEC Turbo mill. An e:HEV hybrid should also be on the cards, utilising a 181 hp/315 Nm electric motor and a 2.0 litre direct-injected Atkinson-cycle four-pot.

While this version of the HR-V will be limited to North America, it will also make its way into global markets as a sub-CR-V model, almost certainly with a new name. It has already been confirmed for Europe, where it will be offered solely as a hybrid.