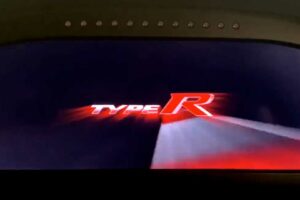 Honda is celebrating 30 years of the Type R badge, which first surfaced in 1992 with the NSX Type R. In time with the celebration, the Japanese marque has completely revealed the next-generation Civic Type R, or at least in design inside and out.

Just like the 11th-generation Civic Hatchback that it’s based on, the new Honda Civic Type R FL5 also holds a certain level of restraint in terms of styling. That’s especially true when compared to its most recent predecessor, the FK8.

And apparently, even the animated graphic during startup stays true to the mature demeanor of the Civic Type R, as seen in a social media post by one Twitter user civic_turbo.

The video, which you can watch on the embedded tweet above or through the source link below, shows the startup screen on the Type R’s instrument cluster. The video shows a first-person view of the car going through FIA curbs, then an animated representation of the Type R badge. It goes well with the overall simple styling of the new red-badged Civic, we reckon.

Given the nature of the language used by the original poster of the video, we assume that the startup animation was from a Civic Type R for Japan. It’s yet to be known whether the US-spec Civic Type R will get the same graphic upon pressing the push-start button.

As mentioned, there are several things that are yet to be known about the Civic Type R FL5. Honda has yet to share the exact power figures from the front-wheel-drive sports car. The turbocharged 2.0-liter four-cylinder from the outgoing Type R is retained in the new model, mated to a revised six-speed manual transmission. However, the company says it’s the fastest, most powerful Honda-branded vehicle ever offered for US buyers.

We’ll know more details about the 2023 Civic Type R in a few months’ time, closer to its planned production launch in the fall.