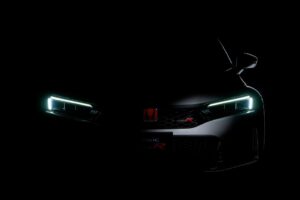 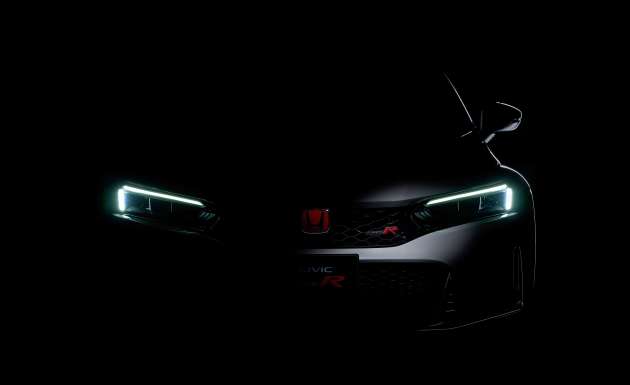 Honda has confirmed that the new 2023 Civic Type R will be unveiled in nine days time. That’s July 21, 2022 for the new hot hatch’s world premiere. The successor to the FK8 is set to hit showrooms in early 2023.

With the debut date announcement, Honda also released the first teaser of the production car. The image you see above is the real deal without the red-black camo of the development mules that have been setting lap records. Here, we see the all-important and much-desired red Honda badge, with a Type R emblem on one side of the grille, which has a honeycomb pattern. The lower grille also has the same mesh design.

The bumper and side intake design is significantly simpler than the FK8’s, and it hints at the overall more mature and clean design of this version. Don’t worry, the big rear wing and now-signature triple exhaust pipes are set to continue. The headlamps have strong ‘eyebrows’ in the form of inverted L-shape LED daytime running lights.

Like before, this Civic Type R is based on the current five-door hatchback version of the Civic, which is codenamed FL. Official details are scarce, but the CTR is expected to be powered by an upgraded version of the K20C1 2.0 litre turbo-four from the FK8, which has 320 PS and 400 Nm. Also expect a six-speed manual gearbox and a limited-slip differential.

One change is where the new Type R will be made. Honda’s Swindon plant in the UK – the ‘home of the Civic Type R’ – is no more, so production of this one has been moved to the US.

By the way, this year is a meaningful one for the household name that is the Civic. Today is the 50th anniversary of the Honda Civic series, which first went on sale back in July 12, 1972. This year also represents the 25 years of the Civic wearing the famed red Type R badge.