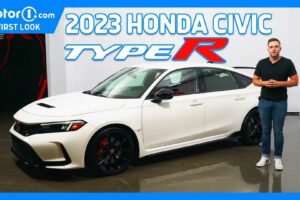 It’s been over a year since we first saw camouflaged prototypes of the 2023 Honda Civic Type R. An official teaser campaign from Honda began six months ago, featuring everything from auto show appearances to setting lap records, all with cars still wearing a camo wrap. Now, the wait is finally over and all is revealed. Well, except for a few minor details like power, performance, and price.

Admittedly, those aren’t minor details but Honda promises more information is coming soon. What we can share right now is that the newest Civic is the most powerful Type R ever. In fact, Honda says it’s the fastest, most powerful Honda-branded vehicle ever offered for US buyers. The familiar turbocharged 2.0-liter four-cylinder from the outgoing Type R still holds station under the hood, sending its power to the front wheels through a revised six-speed manual transmission. There is no sequential gearbox, no all-wheel drive, and no wild hybrid tech. In terms of powertrain, it’s a proper old-school hot hatchback.

As with the engine, Honda isn’t ready to share details on the Civic Type R’s underpinnings save for it being “enhanced.” We do know the car is lower, longer, and wider than the previous model. It also wears a wider set of Michelin Pilot Sport 4S tires, all of which surely contributes to the new Type R setting a front-wheel-drive lap record at Suzuka.

Visually speaking, we finally get a good look at the Type R’s big rear wing in context with the car. It’s not the only upgrade – the front clip is a bit more aggressive with a mesh grille and revised corner intakes. Subtle side sills are found on the fenders behind the front wheels that work with the intakes, enhancing airflow efficiency around the car. Type R wheels and tires neatly fill bulged fender flares, and to maintain the sporty look, the hot hatch has wider rear doors versus the standard Civic. A rounded rear fascia with a diffuser and the triple-exit exhaust completes the exterior makeover.

Inside, of course there’s red mixed with black. You’ll find red on the aggressive sport seats, carpeting, badging, and contrast stitching. Black covers the rest, including the Civic’s handsome dash which carries over from the standard model. A special +R driving mode adds some visual excitement to the driver display, and an onboard data logger offers real-time information on the car and how it’s responding to the driver.

Honda obviously has a lot more to share about the new Type R. As such, this debut is essentially a visual presentation, showcasing what is likely the last non-electrified Type R from the Japanese brand. We will get full disclosure on all aspects of the 2023 Civic Type R in the fall, closer to its planned production launch.