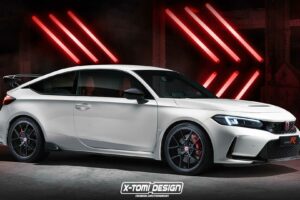 For the new FL5-generation Civic Type R, Honda has significantly toned down the wild styling of the old FK8. Many would argue that’s for the better since the previous hot hatch sent out a strong Need for Speed vibe with its many fake vents and ultra-aggressive appearance. The latest performance machine stays true to the five-door formula, but what if the Japanese brand were to sacrifice some of the practicality for a (subjectively) better look?

This is where X-Tomi Design’s rendering comes into play, imagining the 2023 Civic Type R as a coupe by chopping off the rear doors and lowering the roofline a bit. Perhaps this would make more sense as a high-performance Acura Integra, possibly with the same Type R suffix. It’s only a pipe dream for now, but enthusiasts certainly wouldn’t mind another relatively affordable compact performance car in a sea of crossovers and SUVs.

Although Honda fully unveiled the 2023 Civic Type R’s design this week, it didn’t go into too many details about the technical specifications. We do know it’s longer, lower, and wider than the model it replaces while sticking to the tried-and-tested formula of combining a front-wheel-drive layout with a six-speed manual gearbox with no AWD and/or AT in sight.

Power comes from a turbocharged 2.0-liter gasoline engine with more punch than before, but we just don’t know exactly how much. Expect a minor bump over the 306 hp and 295 lb-ft (400 Nm) of torque offered by its predecessor. It’s going to be the very last Honda to be sold in Europe exclusively with a gasoline engine, with everything after it being either hybrid or purely electric.

Although a coupe is highly unlikely to happen, we’re just glad Honda still caters to enthusiasts by giving them the Civic Si and Type R along with the Acura Integra. The flagship NSX sports car is being retired with the Type S swan song, but it’ll quite possibly come back one day as an EV.