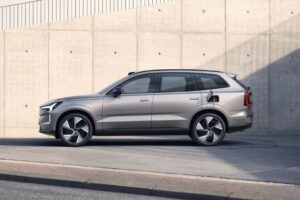 Three big new debuts highlighted the news cycle this week, led by Honda and redesigns of the Accord mid-size sedan as well as Pilot three-row crossover SUV. Those popular American-made vehicles should help the brand bridge the sizable gap to electric vehicles. Volvo’s on the bridge, and on the other side is the EX90, an electric version of its winning three-row crossover SUV.

Here’s what else moved us this week.

The fully electric EX90 is a successor to the gasoline XC90, as Volvo pushes toward an all-electric lineup, although both will be made in upcoming years.

Redesigned this year to mark the 11th generation, the 2023 Honda Accord mid-size sedan sports a new look, updated cabin, and modern take, as well as an excellent hybrid model.

An eight-seat SUV with a newly honed edge, the 2023 Honda Pilot skips hybrids for a Trailsport edition.

With the K5, Kia elevates its mid-size sedan to new heights of value. We give it a TCC Rating of 7.0 out of 10.

The 2023 Mustang soldiers on with massive V-8 power, but that era’s drawing to a close and what the pony car lacks drags down its TCC Rating to 5.7 out of 10.

The 2023 Camaro does well on every track we can think of—but soon it’ll be on the retirement track. We give it a TCC Rating of 5.6 out of 10.