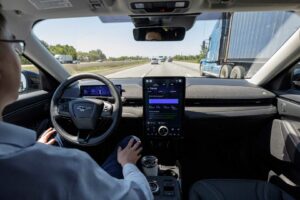 Ford is updating the 2023 Mustang Mach-E and select other models’ Advanced Driver Assistance Systems (ADAS) with BlueCruise 1.2 (also known as Lincoln ActiveGlide 1.2), the latest version of the manufacturer’s hands-free highway driving feature. One of the main new additions is a hands-free lane change function, although it’s not the only piece of news with this big update.

It also adds a feature called “In-lane repositioning,” which doesn’t merely keep the vehicle centered in its lane, but it will actually shift its position within the lane depending on what’s going on around it. For instance, Ford says that when detecting a truck or any large vehicle, the updated Mach-E will actually shift itself to the other side of the lane to leave as much distance between it and the other vehicle as possible.

Another new feature is “Predictive speed assist,” which as its name suggests will do more than just change the vehicle’s speed in accordance with the limit on a certain road. It goes further than that and it will actually slow down the vehicle when it’s driving autonomously and knows that a tight bend is approaching, although Ford says it will do this smoothly and also alert the driver that it is about to slow down.

We are investing in our ADAS team to constantly improve BlueCruise and ActiveGlide for our customers.

The latest improvements allow customers to command lane changes using just a turn signal, and make hands-free driving feel more human-like by smoothly slowing down for turns, and giving more room to large vehicles in neighboring lanes. These improvements are just the beginning of a constant journey toward improving safety and, in the future, giving customers valuable time back.

And while the 2023 Mach-E will be the first Ford to get this updated automated driving system, it will be available on other Ford and Lincoln models that have the same ADAS tech. Ford says it has sold 75,000 (including Lincoln models) with BlueCruise / ActiveGlide and that by the end of August they had racked up 16-million hands-free miles.

BlueCruise can’t be used on all roads yet, and Ford says its use is limited to 130,000 miles of extra-urban roads, but that new roads are identified and added every day. Ford and Lincoln drivers will know they are on these so-called “pre-qualified roads” when a blue message will pop up in their vehicle’s digital gauge cluster.