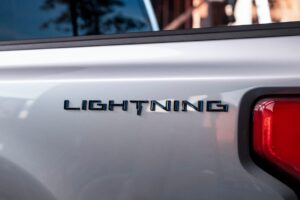 While prior F-150 Lightnings were masters of on-road performance, the new electric F-150 Lightning will likely trade some of its predecessors’ pavement pulverizing nature to emerge as a master of none but a jack of all trades—just like any regular gas-fed, mainstream F-150. As such, we expect the forthcoming Ford EV to perform equally as well both on- and off-tarmac.

That said, the new truck’s straight-line speed is sure to impress, with Jim Farley, Ford’s chief executive officer, stating in a press release that the new Lighting “is even quicker than the original.” Admittedly, a 7.2-second trot to 60 mph isn’t exactly a high bar to clear, even if it is plenty quick for typical day-to-day driving.

Look for more information on the upcoming 2023 Ford F-150 Lightning to arrive closer to the start of the electric truck’s production in spring 2022.