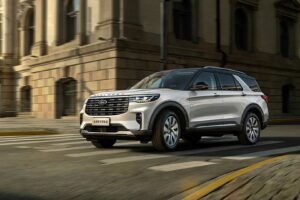 “American sophistication meets Chinese sophistication” is how Ford prefers to describe the recently unveiled 2023 Explorer for the People’s Republic. The midsize SUV is labeled as being an all-new model, but in reality, it’s just a heavy update for the current generation. Right off the bat, we can observe the front grille has been made substantially wider and uses a heavy dose of chrome while being flanked by fully redesigned LED headlights.

The side profile reveals 21-inch alloy wheels with a turbine fan design and there are more changes at the back where the wider taillights take after those of the smaller Equator also sold in China. Prominent “Explorer” lettering on the tailgate replaces where the Ford badge used to be, with the Blue Oval now sitting slightly lower between the taillights. It’s joined by a chrome bar that’s hinner but wider than before.

By far the most notable change is inside where the dashboard now accommodates a gargantuan 27-inch touchscreen we’ve also seen on the Ford Evos sold in China. Naturally, the massive display has swallowed most of the conventional buttons while the central air vents have been moved lower to make room for the XXL screen stretching across the passenger side of the dashboard.

Will these changes be applied to the North American version? Ford Authority claims the tweaks are for the Chinese Explorer only, with the 2023MY US model to remain virtually unchanged. The order books in the SUV’s domestic market are set to open on August 11, with production programmed to kick off on November 7.

The purely electric Explorer is still happening, but its mid-2023 original launch date has been pushed back to December 2024 when production is reportedly starting. It’s the same story with the fancier Lincoln Aviator EV, with both bound to ride on a dedicated EV architecture. As it stands, it’s unclear where the two zero-emissions SUVs will be assembled, but it’s unlikely to be in Chicago or Cuautitlan.