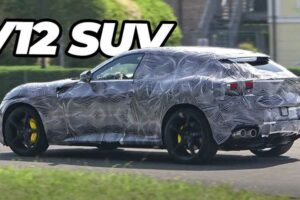 The world didn’t end when Rolls-Royce and Bentley came out with their own sport utility vehicles and we’re certain Ferrari won’t bring on the apocalypse. It’s 2022 and everyone wants SUVs, including one-percenters. Maranello will go after the Cullinan and Bentayga with its own 12-cylinder SUV, but with more focus put on “S” than “U.” Prior to its unveiling in the coming months, the Purosangue (Italian for “thoroughbred”) has been caught testing.

Announced a few weeks ago for a “game-changing” model, the V12 will be at the heart of the Ferrari among SUVs. Enthusiasts will be delighted to hear the Prancing Horse’s engineers have found a way to keep the large-displacement engine alive in the downsizing era. Stricter regulations enforced by authorities to cut down emissions have made smaller turbocharged engines dominate the automotive industry, but the Purosangue will have a big ol’ naturally aspirated V12.

We can hear it in the adjacent spy video of a near-production prototype carrying a thinner camouflage. It certainly sounds like a rev-happy engine that does away with forced induction and one we can safely assume packs quite a punch. How much? Your guess is as good as ours. What we do know is the 6.5-liter unit inside the 812 Competizione made 830 horsepower and 510 pound-feet (692 Newton-meters).

However, Ferrari has gone on record to say an even more powerful V12 is on its way. The Italians have refrained from specifying whether it will go into the Purosangue or a sports car, so we’ll have to wait until later this year when the vehicle will celebrate its world premiere. Being a large four-door model with all-wheel drive, we think it’ll be the heaviest Ferrari ever, so it’s going to need all the muscle it can get to live up to the badge.

Even though it’s still disguised, the most practical Ferrari of them all is already looking far sportier than the vast majority of SUVs out there. In fact, we’re getting the impression it’s more along the lines of an enlarged hot hatchback since the generous ground clearance we usually associate with SUVs has made way for a hunkered-down silhouette.

The company has pledged to keep the Purosangue as exclusive as its traditional sports cars. Not only that, Ferrari will use the same strategy of allowing existing customers to have priority, but the SUV is also expected to attract new buyers to the brand. Much like the Roma coupe and Portofino convertible, the upcoming model will help Maranello lure in younger customers.