2023 Dacia Duster Looks Like An SUV, But It’s Technically A Van 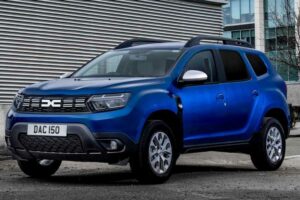 It’s probably fair to say the Duster is Dacia’s most important model, especially when it comes to brand image. The company’s new design boss even said the SUV is Dacia’s Porsche 911 and to a certain extent, we agree with this comparison. If you’ve ever heard about the Duster, you probably know it as a spacious and affordable family hauler, though the Romanian model is now also sold as a commercial vehicle in the United Kingdom.

The Duster Commercial looks like a standard Duster from the outside and the automaker has given it its revised visual identity that can be now seen on all Dacia models. The new face features the Dacia Link emblem and a redesigned radiator grille now in white. The new Dacia logo can be also seen on the rear panel and steering wheel, as well as on the center of each wheel.

Once you get inside, the Duster Commercial reveals its secret – it’s actually a commercial van and it is even homologated as an N1 commercial vehicle in the UK. The Romanian automaker has completely transformed the interior and has replaced the rear seats with a hard-wearing flat load area, offering 57.3 cubic feet (1,623 liters) of cargo space and up to 1,109 pounds (503 kilograms) of payload. This is 46.1 cubic feet (1,178 liters) more than the standard model.

Powering the Duster Commercial is a range of efficient turbocharged gasoline and diesel engines with output varying from 90 horsepower (66 kilowatts) to 150 hp (110 kW). A six-speed manual transmission is standard, while optionally available is Dacia’s six-speed dual-clutch automatic. There’s also a choice between two- and four-wheel-drive configurations depending on the customers’ needs.

The updated version of the Duster Commercial is now available for orders in the UK starting at £13,995 excluding VAT ($17,014 at the current exchange rates), with first deliveries due in the last quarter of 2022.