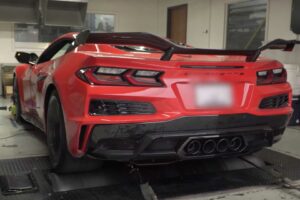 To the delight of Corvette fans, Chevy has already reopened the ordering books for the 2023 Corvette Z06. Those who missed their chance to order theirs the first time can now do so, which will be produced until the end of the model year 2023.

But most importantly, deliveries of the first customer-owned Corvette Z06 have already begun. One could expect some of those Z06 to hit the dynamometer soon, and that time is now, courtesy of YouTuber Speed Phenom. Driving all the way to Dallas, one of the first customer Corvette Z06 hit the dyno to check out the real numbers that the flat-plane crankshaft V8 engine can put down on the ground.

Of note, the Chevy Corvette Z06 packs up to 670 horsepower (500 kilowatts) and 460 pound-feet (624 Newton-meters) of torque at the crank. With the transmission and other mechanicals employed before reaching the ground, you can expect around 10-15 percent power loss or around 600 hp at the wheels.

After three runs, the results were impressive. The first two runs above kept faith with those calculations. With the dyno at SAE setting, the computer calculated around 597-600 hp at the wheels. Torque figures were also pretty much in-line with the spec sheet.

The third run, however, was impressive. After letting the engine cool down, the Corvette Z06 recorded 610 hp at 8,400 RPM, all done while in fifth gear. That represents only around 9 percent power loss; it’s either Chevy underrated the Z06 or the Tremec-sourced 8-speed dual-clutch gearbox was just that efficient, but we’re counting on the former.

Manufacturers underrating their cars on the spec sheet isn’t exactly unheard of. However, those over 600 ponies at the wheels were impressive, considering that they’re coming from a naturally aspirated V8 inside Detroit’s Ferrari.