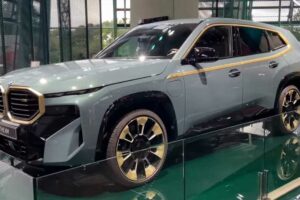 The BMW XM debuted late last month, becoming the second M-specific model ever launched. It’s a big departure from the 1978 BMW M1, with a new video from the rsDrive YouTube channel providing a quick walkaround that highlights the SUV’s bold styling features.

The gold accents around the grille stand out against the black, with the gold XM badge drawing attention. BMW didn’t give the SUV a prominent kidney grille, with a large lower opening occupying the bumper. Gold trim wraps around the top of the daylight opening, connecting with a bold gold accent that runs down its sides, extending into the fenders and encompassing the badges.

At the rear, the video shows off the SUV’s taillights, which protrude from the back of the vehicle. The hatch lacks a BMW roundel, instead wearing an off-center model badge. The busy diffuser, with gold accents, houses the stacked quad exhaust pipes.
There’s a brief glimpse of the interior, which captures the dash-spanning display that operates on BMW’s iDrive8 infotainment software. BMW toned down the interior compared to the Concept XM, but it’s still filled with luxurious materials, the latest technology, and a wide array of driver assistance systems.